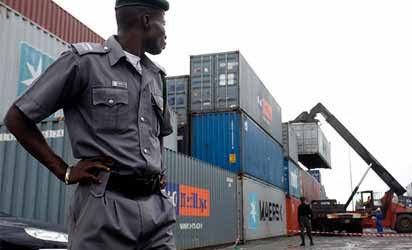 No less than 183,578 metric tonnes of goods with N22.16 billion free on board (FOB) value were exported through Apapa Port in the first quarter of 2020.

The Nigeria Customs Service, Apapa port command, which disclosed the figures in a press release on Friday, said the Q1 2020 export volume showed a huge improvement over this is the total volume of 51,601 metric tonnes exported through the Nigerian premier port in Q1 of 2019.

This is in spite of the negative impact of the Covid-19 on global trade.

Nkeiruka Nwala, spokesperson of the Apapa Customs command noted in the release that exports from the port were boosted by agricultural products, mineral resources and steel bars.

She also attributed the high volume of exports through the port to the closure of land borders by the federal government since August last year.

“In the area of revenue on imports, despite the global pandemic as a result of COVID-19, which is affecting global international trade, the command generated the sum of N110.2 billion against the sum of N94.7 billion generated in the corresponding period of 2019. This Indicates an appreciable increase of over N15.4 billion” Nwala stated.

“This huge increase in revenue generation according to the Customs Area Controller of the command, Compt. Abba Kura was as a result of many factors which includes, strict application of import guidelines, increased level of compliance by stakeholders and openness of the officers and men of the command to address all complaints from the part of importers promptly amongst other measures, ” she noted.

She said the command in its anti-smuggling operation, performed creditably well, leading to the seizure of 80 containers and 4 vehicles with Duty Paid Value (DPV) of N12.5 billion.

“In line with the presidential directives on ease of doing business in the ports, the command boss maintained that Apapa command remains open with officers on the ground to discharge their functions of collecting revenue and securing the nation seaports against an influx of prohibited goods.

“Comptroller Kura further calls on importers to use the opportunity created by the lockdown to evacuate their consignments before normal activities resume”, she concluded.