The management of Dangote Cement Plc has disclosed that the expected 100 winners of the N5 million star-prize in its ongoing Bag of Goodies National Consumer Promo, Season 3 would be offered the opportunity to be signed on as its cement distributors if they so wish. 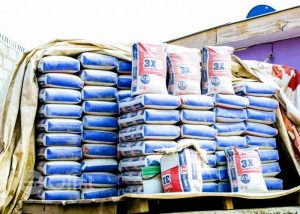 The move is to ensure the winners invest the money profitably and become business owners, the company said at the presentation of N20 million cash to three star-prize winners and five other N1 million winners in Ilorin, Kwara State capital, last week.

While welcoming the winners and guests to the presentation ceremony, Tunde Mabogunje, Dangote Cement‘s regional sales director for South-West, said the economic situation in the country informed the decision to ensure that winning customers judiciously apply their prize money while the promo lasts.

Mabogunje stated that the promotion was specifically designed to alleviate poverty among the customers given the global biting economic reality, noting that Aliko Dangote, chairman of Dangote Cement, is a compassionate person who cherishes wealth distribution.

He urged the customers to continue to patronize Dangote Cement so as to widen their chances of winning, pointing out that those who won N5 million never expected they could win so much money and that no matter how bad the nation’s economy is, the star prize of N5 million would go a long way in easing the economic tension in homes.

The Dangote Cement boss stated that the company has put in extra effort to ensure that all variety of the cement brand are available in the market so that no category of its customers is denied participation in the promo on account of lack of any brand in the market.

Kayode Akin-Bamidele, head of route to market, Dangote Cement, explained that the process involved in winning prizes in the promo was specifically designed to guarantee winning without the customers going through any lucky dip or a draw.

Speaking further on the distributorship opportunity, Akin-Bamidele said it was a deliberate plan to help the winners invest their prize money to generate more money.

“The situation in the country is seen by the Dangote Cement management as demanding that the company serves as business advisor to its teeming customers to generate wealth.

“That is why we say, once you win N5 million, come and become our distributor, it‘s more money for you because as you know, Dangote Cement is the in-thing in the industry and that is how you can generate wealth for yourself and make more money,“ he said.

Ozobialu, who was represented by Bala Ojile, public affairs manager, said the presence of the Commission at the prize presentation ceremony was an attestation to the genuineness of the consumer promo.

Some of the winners explained that they initially doubted the genuineness of the promo until they saw people winning and receiving their prizes. They thanked the management of Dangote Cement for the good gesture.

Dangote Cement had in July unveiled ‘Spell Dangote and become Millionaires‘ in the season 3 of its Bag of Goodies National Consumer promo. At the event in Lagos, the company announced that 500 consumers would win N1 million each, while another 100 would win N5 million within four months. Several other customers would also win millions of naira worth of recharge cards, television sets, refrigerators, generating sets and standing fans as consolation prizes, it said.