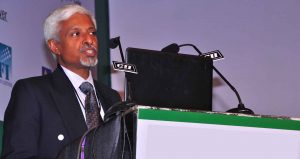 Mathew, it is touted, brings into Dangote cement business his wealth of experience, strategic goals and ambitions to drive growth and expansion.
A regulatory disclosure the company filed with the Nigerian Exchange Limited, stated that Phillip Mathew assumed office in his new positions today, September 15, 2021, and described him as a professional with 34 years of working experience in large global and regional cement industries and has been involved in project management from feasibility to commissioning and stabilisation.
Prior to this appointment he has functioned as process engineer and optimisation manager at Lafarge Philippines, plant manager, technical director, director performance and progress at Lafarge in China and Kuala Lumpur, chief manufacturing officer, while working with multicultural teams in different countries and held several roles, including the recently held portfolio as head of cement excellence manufacturing, Lafarge Holcim, for the Asia-Pacific region; defining the strategic goals and ambitions for cement manufacturing at regional level for a global cement company.

Mathew is a result-driven professional with a progressive management career in large global and regional cement companies, an experienced project manager leading capex projects ranging from small to large size, from initial feasibility studies to commissioning and stabilization, the statement noted, adding that he also has a proven capacity on “soft” projects – implementing systems and operating models, integration of new plants, preparing “operational readiness” of new projects.
In December 2019, Dangote Cement Plc had announced the February 1, 2020 assumption of office of Michel Puchercos as new group managing director/CEO following the expected retirement of erstwhile CEO, Joseph Makoju, on January 31, 2020.
Puchercos had resigned from Lafarge Africa where he held the position of CEO to join Dangote Cement. Now, he will have as deputy another Lafarge former executive who is bringing a lot of experience from manufacturing and production gathered from outside Africa.
Businessamlive Website Stats