Dangote Group, MTN Group and Guaranty Trust Bank Group, among other African brands have been ranked as the most admired brands in Africa while the World Health Organisation (WHO) and MTN top the list of brands recognized as the most helpful during the Covid-19 pandemic., a report by The Brand Africa 100: Africa’s Best Brands  has revealed. 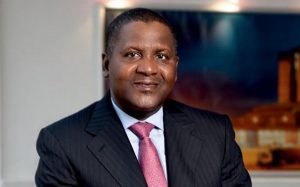 African brands have continued the retention of their 13 per cent market share of the top 100 most admired brands on the continent in the space of a period defined by the coronavirus pandemic which brought the world to a halt with several markets having no other options than to adapt to the new reality. MTN, consistently the only African brand among the Top 10 brands overall, dropped to number 11 for the first time in a decade while American sports and fitness giant, Nike retains the top spot for the fourth year in a row with consumer-electronic heavyweight, Samsung, tech-giant Apple, beverage maker Coca-Cola, sportswear manufacturing brothers, Adidas and Puma, also joining the list, while Gucci, Toyota and Zara also made the list.

MTN and Dangote retain their status as the most admired African brands recalled spontaneously and when prompted, respectively, the ranking report showed.

Also, Nigeria’s Guaranty Trust Bank retained its position as the most admired financial services brand in Africa in 2021. It was followed by First Bank of Nigeria. South Africa’s ABSA Bank inched two places higher in the rankings to become the third most admired financial services brands in 2021 from 5th position last year. In the same vein, Nigeria’s top lenders United Bank for Africa (UBA) maintained the fourth position from last year, while Zenith Bank rounded off the top-ten list.

With Covid-19 limiting entertainment options beyond the house, while many businesses struggled, many digital businesses such as streaming services thrived. This undoubtedly explains South Africa’s DSTV becoming the most admired media brand in Africa, knocking off BBC from its long-held position.  Similarly, American Cable News Network (CNN) retained its position at number three alongside Al Jazeera in fourth. Netflix found itself leaping the line into the fifth position from 9th, while Canalsat, Facebook, NTV, MTN and France’s RFI positioned as 6th,7th,8th,9th and 10th respectively.

According to the report, the top 100 brands in Africa has always been dominated by European brands which have held their share at 41 per cent, but falling one step from its previous position. North America advanced by one place on the ladder, Asia stood unchanged, and Africa retained its 13 per cent share of the most admired brands in the world.  Similarly, the leading African countries that dominated the rankings largely retained their positions with Nigeria one step behind on the log and South Africa unchanged with 5 brands each, Ethiopia (+1) and Kenya (-) also accounted for the13 brands among the Top 100 most admired brands in Africa.

In other areas of the ranking, the world health organisation (WHO) emerged as the number 1 most admired global brand perceived to have been the most helpful brand, given its predictably global omini-presence during the pandemic. Significantly, MTN, which donated over 7 million doses of Covid-19 vaccine to 9 African countries, is the leading African and private sector brand standing at the number 2 spot, in private sector list where all multinational mobile operators in Africa such as Vodafone Group at number 3, Orange at number 4, Airtel Africa at number 6 position; as well as media brands such as Facebook at 10th on the chart and DSTV at 24th position made the list of the Top 25 most admired brands. These brands were highly instrumental in communicating about the pandemic and keeping people connected. However, Nigeria’s Dangote in the 8th position is the only industrial brand on the list of most helpful brands.

Based on the fundamental role played by the private sector during the pandemic, the list is 80 per cent dominated by diverse private sector brands and 20 per cent governmental and non-governmental agencies such as the Red Cross holds the 5th position, multi-lateral agencies such as WHO and Unicef on the 7th position, government agencies such as the Center for Disease Control stand at the number 16 spot and USAID at 19. Unsurprisingly, the leading pharmaceutical groups, Johnson & Johnson stay 12th and AstraZeneca stays 25th and rounded off the list.

Spectacularly breaking into the list and staying at the 51st position of the top 100 admired brands in Africa is Ethiopian Airways, which is the only African airline to have seemingly thrived during the pandemic, the first of the continent’s airlines to resume service and converting passenger planes into cargo planes to transport critical PPE’s around the world and the continent during the pandemic’s depths. While Nigeria’s Globacom Communications and Nasco Group joined the list at number 62 and 63 respectively among the top 100.

According to the commentary by Thebe Ikalafeng, Founder and Chairman of Brand Africa and Brand Leadership on the rankings, There is no doubt the pandemic, that continues to cost lives and livelihoods, and coincided with the launch of the implementation phase of the AfCFTA which aims to accelerate intra-Africa trade from 18 per cent to 50 per cent in 2030, is becoming a catalyst for loconomies with nations having to look internally for sustainability.  With the internal shifts in the rankings in particular the African brands,   Africa can and will need to grow its own brands to meet the needs of its growing consumer market. African brands will continue to play a dual role of being globally competitive but most importantly of transforming the continent’s promise into a real change.”

Also, Caitlin van Niekerk, Global Client Development Manager, GeoPoll, said “While mobile has always been an expedient and effective tool to provide us reach and accessibility across the continent, it became more important during the pandemic as virtually the only way to reach respondents across the continent, providing us vital and timeous results at a critical time.”

Meanwhile, Karin Du Chenne, Chief Growth Officer Africa Middle East for Kantar, which has been the insight lead for Brand Africa since its inception in 2010 says, “Despite the increase in the sample size and countries surveyed and more than 80,000 in brand mentions, the survey continues to yield a very consistent picture of a steadily transforming continental brand landscape and the brands that will drive the African transformation.”