Dangote Petroleum Refinery and Petrochemicals Company on Sunday announced the arrival of the key equipment that would process crude oil in its refinery being built in Lagos. 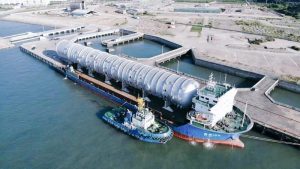 The firm, in a statement, described the crude distillation column equipment as the largest in the world with a distilling capacity of 650,000 barrels per stream day.

Capt. Rajen Sachar, the company’s head, maritime and ports infrastructure, was quoted as saying the equipment was the biggest single-train facility used for refining crude.

The refinery equipment, according to the statement, was manufactured by Sinopec in China and is the primary unit processor of crude oil into fuels.

Sachar said that the refinery, when completed, would produce Euro-V quality petrol and diesel, as well as jet fuel and polypropylene.

He said the strategic location of Nigeria in West Africa would help in reducing the transportation costs of these fuels to other countries in the African subcontinent, thereby providing cost-effective, high-grade petroleum products to them.

He said it took 14 months for the crude oil processor to be constructed by Sinopec in China and eight weeks to bring it to Nigeria.