Industrial conglomerate, Dangote Group, has made a declaration that it would promote engineering in Nigeria on a night its works were recognised by the Nigerian Society of Engineers (NSE) with a series of awards for its ‘outstanding contributions to the development of the engineering sector in the country.’ 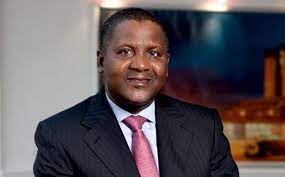 Speaking during the event, Edwin, who expressed the company’s appreciation of the recognition and awards, pledged Dangote Industries’ commitment to the development of engineering in Nigeria.
In a statement signed by Anthony Chiejina, group head, corporate communications, the company said the  awards were presented during the NSE Ikeja Branch’s recent dinner and awards ceremony themed ‘Integrated engineering development as a catalyst for homegrown industrial revolution.’
Edwin said the company has over the past years invested in the training and development of young engineers who have acquired sufficient knowledge and  taken up the responsibility of managing Dangote Cement plants across Africa.

He stressed that through adequate training and exposure to the latest science and technology, Nigerian engineers now work as expatriates in Dangote Cement plants located in other countries.
Dwelling further on the company’s achievements in the engineering sector, he noted that the company has over the years, developed a pool of engineers including; mechanical engineers, electrical engineers, chemical engineers and several other engineering fields in the company. He added that asides growing and developing the engineers to work in Nigeria, the company has also started exporting them to Dangote Cement plants across Africa as expatriates.
“When I was selecting the equipment for the construction of plants in Nigeria, a company in Germany wondered why I had to select such sophisticated equipment to establish a plant in Africa. They thought I was crazy.  I had to take that decision to choose sophisticated and ultra-modern technology because I believe that Nigerian engineers, if given the necessary training and exposure, can compete with their counterparts in other parts of the world,” he said.
Edwin added that no plant in Europe and U.S can claim to have more technology than what Dangote has in its plants, noting that Dangote has most of the technologically advanced plants in the world, which are being managed by Nigerians
He commended NSE Ikeja Branch for focusing on training and development of young engineers, which he said, would help prepare them to take up higher challenges in their profession.
In his remarks, Olutosin Ogunmola, chairman, Ikeja Branch, NSE, said the association decided to honour Dangote Industries in appreciation of its significant contribution to the engineering profession.
Ogunmola stated that the association was established to promote, protect, encourage and maintain a high standard of engineering study and practice and to encourage greater efficiency therein.
According to him, the NSE’s objective is to promote the advancement of engineering education, research, and practice in all its ramifications with a view to maintaining and enhancing the professional capabilities of its members so as to better equip them to fulfill the needs of the profession for the good of the public and the nation of large.
Other awardees at the event were Babajide Sanwo-Olu, Lagos State governor, John Holt Plc, Kenol Nigeria Limited, and Pilot Science Company Limited, among others.
Businessamlive Website Stats