At the 1st Climate Adaptation Summit 2021 opening session in Davos, Switzerland, Akinwumi Adesina, president of African Development Bank (AfDB), has asked the developed countries to fulfil their $100 billion per year in climate financing promised to the developing countries. 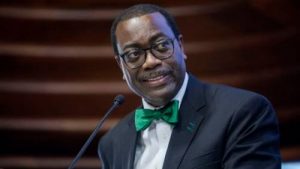 “It is time for developed countries to meet the $100 billion per year in climate finance promised to developing countries. Kofi Annan, the late former United Nations secretary-general, once told me ‘The only promises that matter, are the promises kept.’ So, let us turn words into action, hope into reality, and promises into financing for Africa,” Adesina said while addressing global leaders at the summit.

The AfDB boss commended Prime Minister Mark Rutte of The Netherlands and Ban Ki-Moon, the former United Nations Secretary General, for their visionary leadership in organising this Summit.

He said climate change is changing hopes and livelihoods, dramatically, and that Africa’s growth is being compromised by climate change.

“The sight of locust swarms devastating thousands of hectares of crop land in East Africa was shocking. Perennial droughts and encroaching deserts lay bare the vulnerability of the Sahel of Africa, scotching lives into misery and driving migration. Yes, we all see these things. Now –we must feel. Now –we must act. Now –we must deliver on accelerated climate adaptation for Africa. Together we adapt, together we prosper!” Adesina said.

He disclosed that the AfDB is at the forefront of climate finance for Africa, noting that the bank has quadrupled its financing for climate to reach $25 billion by 2025, increased the percentage of its climate financing devoted to climate adaptation from 26% in 2016 to 55% in 2019; and launched the Desert-to-Power initiative – a $20 billion initiative – to build the world’s largest solar zone in the Sahel.

The AfDB president informed that at the ‘One Planet Summit’ with President Emmanuel Macron of France, he announced that the AfDB will mobilize $6.5 billion in support of the “Great Green Wall of the Sahel,” adding that Ban Ki-Moon (former UN Secretary-General) and himself have jointly established the Global Centre for Adaptation in Africa (CGA-Africa), based at the bank.

“The African Development Bank and GCA-Africa have launched the ‘Africa Adaptation Acceleration Programme’ to mobilize $25 billion to scale up transformative actions on climate adaptation. The programme needs your strong support,” Adesina said.