The Delta State government has been subjected to a revenue deficit of N40 billion as it undergoes implementation of its 2021 budget. 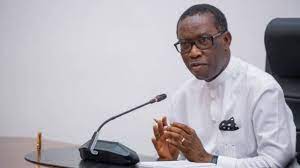 Barry Pere-Gbe, the Delta State commissioner for economic planning, who made the disclosure at the 2022 Citizens Budget Engagement Forum held in Asaba, the state capital, attributed the shortfall to insufficient funds from the federation account.

Pere-Gbe, however, assured that despite the deficit, the state government is committed towards efficiency and effectiveness in harnessing the abundant human and natural resources to transform the state into one of the most developed in the country.
According to the commissioner, the state aims to achieve the expectation through strategic implementation of projects and programmes, adding that submissions from the summit would be incorporated into the budget for proactive, efficient and more effective planning.
He explained that it was in continuation of the steps by the Ifeanyi Okowa led administration to make the state great that necessitated a strategic consultative engagement process with relevant organisations and groups for the preparation of the budget. He added that the state remains committed to transparency in the execution of its budgets as signed up with the open government partnership domiciled with the Federal Ministry of Budget and National Planning.

On his part, Charles Aniagwu, commissioner for information, encouraged citizens’ participation in governance, noting that their contributions would significantly help the state government in deepening its budgeting processes, while  their comments, remarks and observations would be channelled to the governor for evaluation and consideration.
He also encouraged the people to monitor government projects in their respective communities to ensure that the government’s projects were executed in line with contractual agreements.
Businessamlive Website Stats