Deutsche Bank is focused on achieving sustainable profitability, a source at Germany’s largest bank said on Thursday, seeking to distance the lender from talk of a merger with rival Commerzbank. 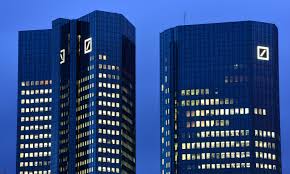 The suggestion that such a merger is the only option for Deutsche is “completely false”, said the source, speaking on condition of anonymity.
Shares in both lenders tumbled on Thursday after Bloomberg reported that Deutsche was expecting a government-brokered merger with Commerzbank by mid-year if efforts to restructure the lender fall short of targets.
A merger may become the only option if Deutsche’s performance does not improve in the first quarter, the report said, citing people briefed on the thinking of executives.
Deutsche Bank and Commerzbank declined to comment.
Deutsche shares were down 5 percent at 1350 GMT while Commerzbank was off 6.7 percent.
Finance minister Olaf Scholz has spoken in favor of strong banks and his team has met frequently with executives of Deutsche, Commerzbank and major shareholders.
Deutsche Bank Chief Executive Officer Christian Sewing has repeatedly said that he was focused on the bank’s “homework” – returning the bank to profitability after three years of losses.
On Friday, the bank will report its 2018 results and analysts expect it to deliver its first annual profit since 2014.
CEO Sewing is also likely to face further questions about a possible merger.
Shell spurts cash despite oil price slump
A Deutsche supervisory board member said last week that there was no desire among board members for a merger with Commerzbank.
Gildas Surry, a portfolio manager with Axiom, which holds Deutsche Bank bonds, said that merging the two banks would be like mixing oil with vinegar, with questionable cost and revenue synergies.
But those hurdles may not be enough to sway governments pressing for banking consolidation. “It is very difficult for politicians to forgo their national champions,” he said.