Mounting political risks from Washington are adding to reasons for traders to be bearish about the dollar as the market hurtles toward the end of 2018. 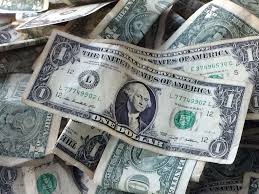 Most forecasters were already predicting that the greenback, which this month touched its strongest level in a year and a half, would be in for a rougher time in 2019. Much of that stemmed from views about the outlook for economic growth in the U.S. and elsewhere, as well as predicted central bank policy developments and concern about a potential policy mistake from the Federal Reserve. But heightened political dysfunction, government paralysis and potential threats to the independence of the Fed are now adding to the complication.

“The markets continue to reel from last week’s gut-punch from the Fed, topped off with a heaping portion of shutdown fears and heightened geopolitical risk,” said Win Thin, global head of currency strategy at Brown Brothers Harriman & Co. “The dollar has held up relatively well in light of recent developments, but it remains vulnerable to a loss of confidence in U.S. policy makers.”

Bloomberg says the greenback’s slide in holiday-thinned trading on Monday underscored those risks. It fell against most of its Group-of-10 peers following weekend news that the U.S. government had gone into partial shutdown amid political wrangling and that President Donald Trump has raised the specter of potentially firing Fed Chairman Jerome Powell. Meanwhile, U.S. stocks fell to a 20-month low as Treasury Secretary Steven Mnuchin failed to assuage investors’ rising anxiety with a hastily called meeting of top financial regulators and Trump launched another Twitter salvo against the Fed.

Confronted with these kinds of risks, investors flocked to Treasuries Monday, while currency traders buoyed traditional havens such as the Japanese yen and Swiss franc.

“A move to oust Powell would be disastrous,” Thin wrote in a note. “Markets may not like Fed policy, but they would like a loss of Fed independence even less.”

Not everything boils down to anxiety surrounding U.S. politics, of course. Marc Chandler, chief market strategist at Bannockburn Global Forex, said he expects threats in Europe to weigh more heavily than U.S. government news in 2019.

In the meantime, though, the current political situation in America “doesn’t look good,” he said. “This isn’t screaming to me: ‘Go buy American assets.’ ”