Early rains in Nigeria’s rice-growing regions have boosted prospects for a good harvest, according to the farmers association, increasing the likelihood of lower imports by one of the world’s top buyers of the grain. 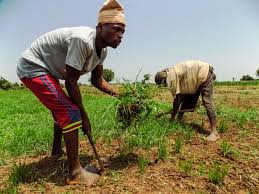 “We have experienced early rains in the central states and in the northeast,” Aminu Goronyo, president of the Rice Farmers Association of Nigeria, said by phone from Abuja, the capital. “From all indications, we expect a bumper harvest thanks to favorable weather.”
Nigeria currently produces 4.8 million metric tons of the grain a year and has to import the balance to meet domestic consumption estimated at more than 8 million tons a year, according to the U.S. Department of Agriculture. Nigeria’s Agriculture Ministry insists local output has reached 7 million tons a year, with the government expecting to cut as much as 1.9 million tons of rice imports next year.
Rice farmers are getting government support through a program backed by the central bank to provide them with low-interest credit, helping draw more farmers to the crop, according to Goronyo.