After South Sudan’s peace deal collapsed, gun battles rocked the capital and soldiers ransacked his clothing store, Ahmed al-Nur faced the economic crisis in a trade that’s had an unexpected boost from the new wave of violence: gold.

With inflation soaring and the currency collapsing, the precious metal that’s mainly extracted by artisanal miners in Africa’s newest nation is more highly prized than ever. At the same time, last year’s spread of armed unrest to Equatoria — a southern region that may be home to sizable deposits — has left authorities with little remit over mining. The result: a virtual free-for-all as miners and traders shrug off the risks of the three-year civil war and pile in.

“Many of us are going to look for gold because we know the profits are big,” al-Nur, who travels to Equatoria to buy from miners, said in an interview. He lost about $20,000 when his store in the capital, Juba, was looted last year and says he now makes as much as $1,000 a month selling gold in the city, a trade that’s officially illegal.

South Sudan, mired in the conflict that has killed tens of thousands of people since December 2013, relies on oil production for almost all its revenue and hasn’t officially exported any gold. While details on the country’s mineral potential are scarce, Jersey-based Equator Gold Holdings Ltd. described it as the “world’s most promising frontier exploration destination” and said its southern Luri project, suspended because of the war, may contain several multi-million ounce gold deposits. 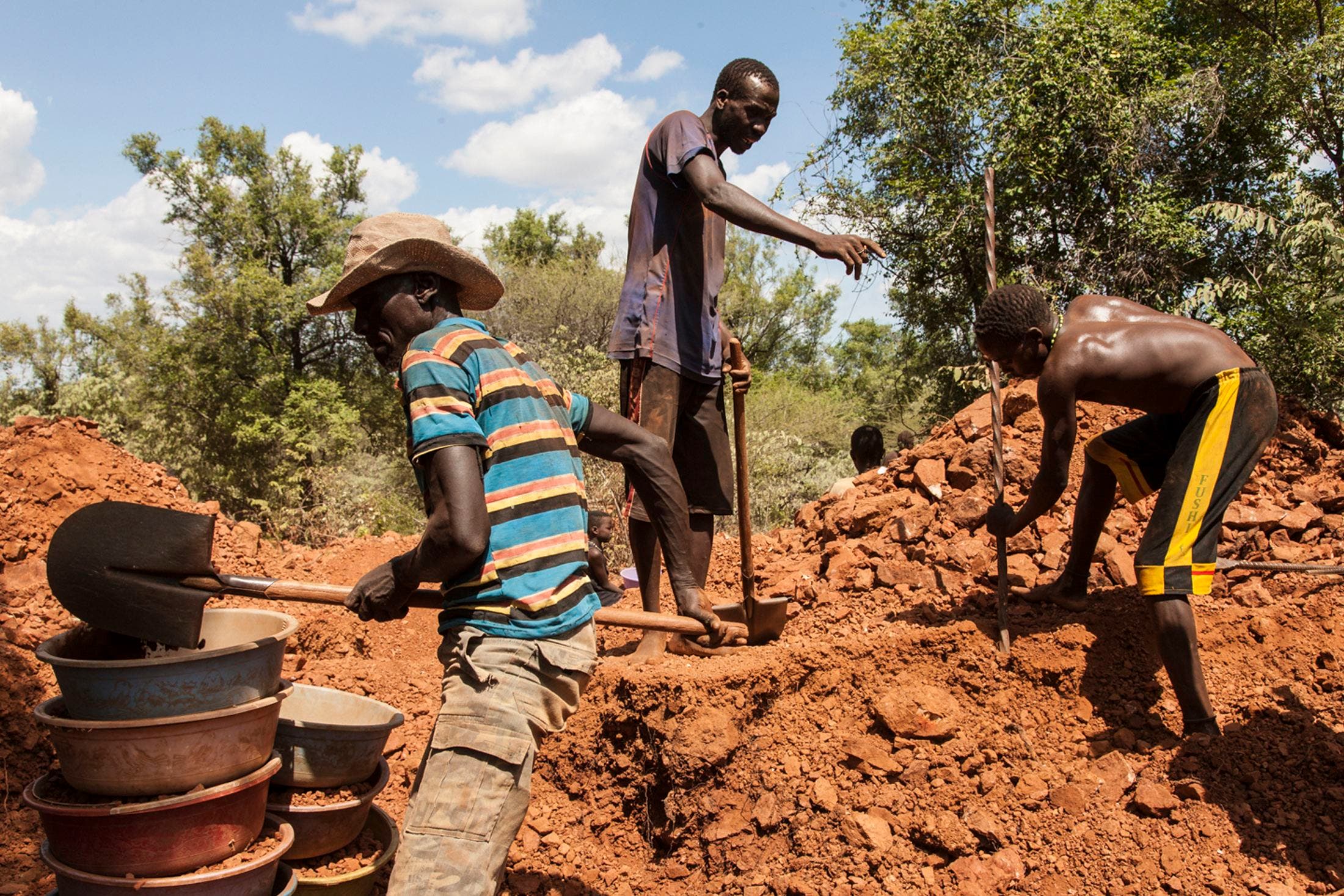 The Mining Ministry said June 1 that Dove Mining of Thailand and Panamanian company 4MB will begin the first official gold exports in September. They expect initial annual shipments to be worth $500 million, with about 55 percent of profits to be shared with the government in Juba and local administrations.

Home to sub-Saharan Africa’s third-biggest oil reserves, South Sudan has faced economic chaos after the conflict cut crude output and lower oil prices further reduced government income. The economy will probably contract 3.5 percent this year, after shrinking 13.8 percent last year, according to the International Monetary Fund, while inflation was 334 percent in May.

“The country’s economic activity is at a standstill, oil is not taking off,” said Lual Deng Lual, managing director at the Ebony Center for Strategic Studies, a Juba-based think tank. “Now people have turned to what is there.”

London-based Global Witness said it has received reports of increased South Sudanese gold trading. A June report on Uganda’s gold trade by the advocacy group said that “minerals from the Democratic Republic of Congo and South Sudan — that might be funding conflict and human-rights abuses — pass through Uganda on their way to international markets.”

A central bank study in March noted about 200 unofficial gold traders are working in Equatoria, dealing in a combined 40 to 50 kilograms (1,411-1,764 ounces) per month, according to Andu Ezbon Adde, under-secretary at the Mining Ministry. When the bank sent staff to study the trade and offer to buy at 3,000 South Sudanese pounds ($24.25) per gram, black-market traders began purchasing for as much as 50 percent more, he said.

Rebels in Equatoria, a region of nine states that initially escaped the worst of the broader conflict and extends south from Juba to the borders with Congo, Uganda, and Kenya, took up arms against President Salva Kiir’s government about a year ago.

A counterinsurgency followed and there’s been a wave of alleged atrocities, mainly against civilians, with government forces and rebels both using hunger as a weapon of war, Amnesty International said this week. While many people fled their homes, others “mad after gold” are “taking advantage of security loopholes to move in to buy gold illegally,” Adde, the ministry official, said in an interview. Traders pay armed groups for access to the mines, he said.

The governor of Kapoeta, a state that has at least 12 gold sites and whose capital is about 300 kilometers (186 miles) southeast of Juba, said “foreigners” had seized control of some mines in the area in the past year. Speaking by phone, Louis Lobong Lojore alleged the entire gold business was run by non-South Sudanese and said the government is working on policies to empower local citizens to benefit from the resources.

Information Minister Michael Makuei Lueth last month said the government is working on an agreement with small-scale miners to buy their gold for export to help boost the economy.

Al-Nur runs the gauntlet to Kapoeta state on a two-week buying trip each month, bargaining rides from army vehicles or truckers through areas teeming with armed groups to reach miners willing to trade. Finding and negotiating his deals takes about five days, and he says he makes 50 percent profit after spending about $2,000 each trip.

He’s aware of the dangers. In May, a Chinese citizen and Ugandan were among four people involved in the gold trade who were killed in Kapoeta when they strayed into fighting between ethnic groups, according to Adde.

“It is a big risk,” al-Nur, who’s originally from war-torn Darfur in neighboring Sudan, said as he drank tea at Juba’s Jebel market, where the battered stalls still show the signs of last year’s looting. “But after I lost the shop, there was nothing else to do but to try and raise money as quick as I can.”