The federal government of Nigeria spent $1.09 billion, an equivalent of N387 billion, between January and September this year to service debt, the Central Bank of Nigeria (CBN) has revealed in a new report. 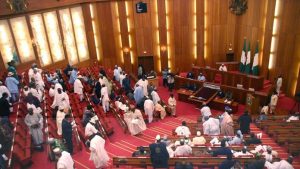 The international payment data by the CBN showed that debt servicing gulped a total of $1.28 billion or N454.4 billion in nine months of 2018.

The report also shows that the CBN has only been servicing the Federal Government debts and not paying down the principals.

The CBN further disclosed that a total of $485.8 million or N172.5 billion was spent to service debts in July, August and September 2019.

Further analysis of the report showed that on month-on-month basis, the CBN in January spent $65.4 million to service debts; it increased by 196 percent to $193.4 million in February; and dropped to $95.75 million in March.

The apex bank in its financial stability report explained that the consolidated domestic debt stock of the Federal Government in December 2018 was N12.44 trillion.

According to the CBN, the amount reflected an increase of 2.40 percent over the N12.15 trillion recorded at end-June 2018.

The CBN further noted that the FGN bonds constituted 73.41 percent while the Nigerian Treasury Bills constituted 21.99 percent of domestic debts.

The Monetary Policy Committee members of the CBN continued to express concerns over increasing debt and its vulnerability to the nation’s economy growth.

A member of the committee, Robert Asogwa, in his personal statement, said, “Based on the Bond Issuance Calendar of the Debt Management Office, there were three additional FGN bond auctions in July, August and September to raise money to part-finance the 2019 federal budget while additional issuance of Eurobond is expected in the latter part of 2019 or early 2020.

“As the threat of debt vulnerability continues, a coordinated domestic revenue expansion with simultaneous fiscal prudence as suggested in the last MPC meeting still remains the key to addressing the weak fiscal position of the economy.”

Another member of the MPC, Dahiru Balami, said the major risks and vulnerabilities to the Nigerian economy were security challenges, slow economic growth, low government revenue and growing federal and state government debts.

Zainab Ahmed, the minister of finance, budget and national planning, had said that Nigeria’s debt was not as worrisome as people thought.

She insisted that despite the foreign and domestic debt stock, Nigeria had no debt crisis.

Another member of the MPC, Mike Idiah, said the fiscal authority would need to appreciate the urgency of implementing fiscal reforms aimed at boosting non-oil revenue mobilisation significantly, particularly the tax revenue.

Analysts in the country’s economic and financial space have also expressed concerns over the government’s aggressive drive towards revenue generation and borrowings, warning that servicing the debts in the future might impact negatively on the fiscal balance of the government.

According to analysts at United Capital Limited, “Nigeria’s debt profile as of June 2019 was reported at N20.4 trillion, up 6.2 percent from December 2018.