As part of its effort to promote local content and enhance economic growth, Eko Atlantic, a 10 million square metres land reclaimed from the ocean and protected by an 8.5-kilometre long sea wall will source the raw materials and workforce used to reclaim, protect and develop the region, locally. David Frame, managing director, South Energyx Nigeria Limited revealed during a tour of the Eko Atlantic Axis. 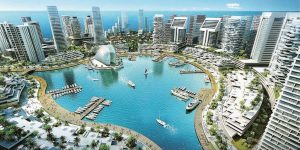 The project funded and developed by South Energyx Nigeria Limited, a subsidiary of the Nigerian based Chagoury Group of companies, in partnership with the government of Nigeria, is the largest real estate development project in the country which, in the long run, would have the capacity to accommodate over three hundred thousand residents and two hundred thousand visitors daily as it is designed and developed as a self-sufficient smart city with its own power generation, hygienic water, modern infrastructural road works and underground advanced fibre optic cables for telecommunications and surface drainage pipes laid beneath the ground across the city.

“The state of the art infrastructures and favourable tax policies make the environment conducive for emerging markets and other vital economic sectors of the country. Asides oil and gas, there would be facilities such as a technology village operational within the Eko Atlantic, which would also lead to increased economic activities and growth,” Frame said.

He further explained that the project would be crucial for economic diversification and increased gross domestic products, especially as the oil and gas sector remains a volatile sector and source of revenue for the country’s developing economy and a gateway to emerging markets of the continent.

Similarly, he noted that domestic and international financial institutions are already tapping into the opportunities thrown open by the project.

“National and international banks have been quick to capitalise on the opportunities with the likes of First City Monument Bank, First Bank, Access Bank and Guaranty Trust Bank collaborating and harnessing the enormous potentials and opportunities the largest real estate project in the country presents,” said Frame.