The Central Bank of Nigeria (CBN) said it paid out a total of N927.94 billion to more than 4.5 million smallholder farmers cultivating 21 commodities across the country in a space of 12 months, while the sum of N75.99 billion was disbursed by the bank also to support the cultivation of over 383,000 hectares of maize, rice and wheat during the 2022 dry season under the Anchor Borrowers’ Programme (ABP).
Godwin Emefiele, the CBN governor, disclosed this while reading out the MPC Communiqué of the recently concluded monetary policy committee meeting of the CBN held in Abuja. At the meeting, Emefiele said there was a review of the performance of the bank’s intervention programmes aimed at stimulating productivity in manufacturing/industries, agriculture, energy/infrastructure, healthcare and Micro, Small and Medium Enterprises (MSMEs). 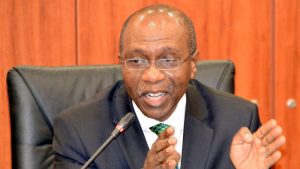 He further revealed that the CBN released N1.76 billion to finance two (2) large-scale agricultural projects under the Commercial Agriculture Credit Scheme (CACS) as well as another sum of N151.23 billion under the Real Sector Facility to 15 additional projects in agriculture, manufacturing, mining, and services.
On the utilisation of the funds, he stated that it was both Greenfield and brownfield (expansion) projects under the Covid-19 Intervention for the Manufacturing Sector (CIMS) and the Real Sector Support Facility from Differentiated Cash Reserve Requirement (RSSF-DCRR) and that this brings the total disbursement under the RSF to N1.40 trillion which was paid out for 331 projects across the country.
“As part of its effort to support the resilience of the healthcare sector, the Bank also disbursed N498.00 million to two (2) healthcare projects under the Healthcare Sector Intervention Facility (HSIF), bringing the cumulative disbursements to N108.85 billion for 118 projects, comprising of 31 pharmaceuticals, 82 hospital and 4 other services.
“To support households and businesses affected by Covid-19, the Bank disbursed N20.29 billion to 40,521 beneficiaries, comprising 35,340 households and 5,181 small businesses under the Targeted Credit Facility (TCF) within the period. The cumulative disbursements under the TCF stood at N369.78 billion to 777,666 beneficiaries, comprising 648,052 households and 129,614 small businesses. To further promote entrepreneurship development among Nigerian youths, the Bank disbursed N293 million to 59 beneficiaries under the recently introduced Tertiary Institutions Entrepreneurship Scheme (TIES),” Emefiele said.
Furthermore, a total of N47.83 billion has been disbursed for the procurement and installation of 858,026 electricity metres across the country under the National Mass Metering Programme’s phase-0 while noting the improved method of collections by electricity distribution companies (Discos) due to increased metre installations.
“The Bank released N274.33 billion to power sector players, as part of its effort to support the sector under the Nigeria Bulk Electricity Trading Payment Assurance Facility (NBET-PAF). This was in addition to the N20.58 billion released to Distribution Companies (DisCos) under the Nigeria Electricity Market Stabilisation Facility – Phase 2 (NEMSF-2). To further support the development of enabling infrastructure in the gas industry, the Bank released additional N3 billion for the augmentation of an existing infrastructure, bringing the cumulative disbursements under the Intervention Facility for National Gas Expansion Programme (IFNGEP) to N42.20 billion for six (6) projects,” Emefiele concluded.
Businessamlive Website Stats