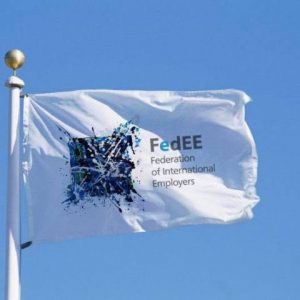 The Federation of International Employers (FedEE), a leading corporate membership organisation for multinational companies, has accused the European Union of ignoring the rule of law and said the EU was “being regulated by false assumptions to the point of fraud.”

In a statement sent to business a.m. FedEE said while it generally took a positive stance towards the EU, and it owing its existence to the early funding from the the European Commission, it could not stand by and let an increasing straight jacket be wrapped around EU employers.

It explained that its concern are driven by numerous reasons, but noted the following as instances:

* The EU continues to introduce measures that are contrary to Art 153 (5) of its Treaty – which give it no powers to introduce measure in the field of “pay”. When challenged about this MEPs and officials either do not respond at all, or give false justifications for their actions.

* The EU continues to tolerate country laws that do not correctly implement EU Directives – especially in relation to annual holiday carryover. This is, for instance, the case in Italy.

* The EU refuses to recognise that sectoral collective bargaining endorsed by the state – as in France – is anti-competitive (anti-trust) under EU rules and amounts to a “wage cartel”. This would not be lawful in the USA.

* The European Court of Justice continues to base its decisions on erroneous and unproven assumptions relating to working time. This includes the continued contention that the Directive is a health and safety measure when, at the time of its introduction, there was little research to back that up. In fact, the only reason it was classified as a health and safety measure was to allow the measure to be passed by a qualified majority vote instead of “unanimity”. If the latter (correct) course had been taken, then it would have been opposed by the UK and never passed. So 26 years down the line the European Court of Justice is basing its decisions on a huge lie.

* The EU is failing to recognise that the GDPR is not only proving to be toothless – in spite of much over-reaction across the EU – but is a bureaucratic mechanism that, due to the heavy-handedness of its promotion by government agencies, is reducing the competitiveness of EU-based businesses.

“It is again very ironic that one of the biggest prosecutions of a company under the GDPR was undertaken recently in Greece – even though the Greek government had not implemented the GDPR at the time and was itself being taken to the European Court of Justice for non-compliance. One of the key principles in the rule of law is that those institutions applying the law must not themselves be tainted by serious infringements of it. This applies both to co-existing governments and courts of the same state. The EU and its member states unfortunately live not only by their own privileges and double-think, but are happy to defend the indefensible,” the statement quoted Robin Chater, secretary-general of FedEE, as saying.