Hameed Ali, the comptroller-general of the Nigerian Customs Service (NCS), has urged Nigerians to endure short-term pains in order to enjoy long-term gains from the partial closure of the country’s land borders. 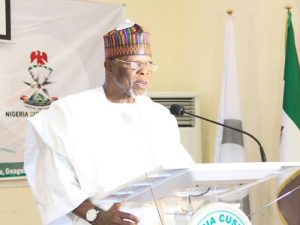 This is as the NCS announced the seizure of 99 containers valued at N2.03 billion from its two area commands in Port Harcourt.

Addressing journalists after an inspection of the seized items at the Customs Area II Command in Onne, Rivers State, Ali noted that many Nigerians are complaining of hardship arising from the border closure.

He said many people have stated that the time was not ripe for the closure of the borders as the government was yet to provide the necessary infrastructure to encourage local production of needed goods.

According to him, “There will never be a good time. The decision to close the border is ripe; we don’t need to have 100 percent electricity or good roads before we take the step. Most importantly is that we must be able to bear the initial pains in order to stabilise and have long term successes.

“We don’t have to eat rice everyday. There are other alternative foods. I assure you that the price will stabilise and the ordinary farmers will have value for their farming business.”

The Customs comptroller general also advised Nigerians to be wary of rating imported foreign rice as most them currently in the market are expired and are re-bagged, after polishing them with chemicals.

“All those things they are bringing into our country are aimed at bringing us to our knees. We must reach out to Nigerians for them to know the deadly effect of what they are consuming.

“We are consuming expired foreign rice. When it causes cancer, we would begin to find who to blame. What they (importers) do is that they polish and re-bag the rice after polishing it with chemicals for unsuspecting consumers to eat,” he stated.

Ali also said there was need to dredge the country’s ports to allow big ships access in order to boost maritime revenue in the country.

He said: “The problem is that we don’t have a deep sea port. Most of the big ships, when they come, they discharge on the high sea because our ports are not deep, then we have to use barges to evacuate them.