THE MANAGEMENT OF ETHIOpian Airline says beginning from Saturday 15th of June 2019 the airline will commence connecting flights to Johannesburg from Lagos. 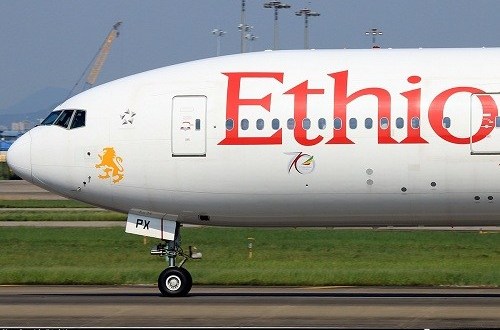 Firihiewot Mekonnen, the airline’s general manager in Nigeria, said the flights will operate daily from Lagos via Lome in Togo.
In the meantime, with the African Football Nations Cup kicking off and Nigeria also involved in the FIFA female World cup, the airline has wished the players well at the two tournaments, even as it assured it will always provide connections to these host countries of France and Egypt.
Ethiopian Airlines is also still basking in the euphoria of serving fans of the globally renowned British football teams Liverpool and Tottenham Hotspur in their travel to Madrid, where the teams played the European Champions League final match.
Ethiopian said it deployed three chartered flights from London, Liverpool and Manchester carrying the fans to Madrid, adding that it was delighted that the supporters of the football teams enjoyed the features of its latest aviation technology aircraft along with the airline’s award-winning customer service and the overall travel experience. Ethiopian Airlines is the largest aviation group in Africa and a SKYTRAX certified four star global airline. In its seventy plus years of operation, Ethiopian has become one of the continent’s leading carriers, unrivalled in efficiency and operational success.
Ethiopian commands the lion’s share of the Pan-African passenger and cargo network operating the youngest and most modern fleet to more than 120 international passenger and cargo destinations across five continents.
Ethiopian fleet includes ultra-modern and environmentally friendly aircraft such as Airbus A350, Boeing 787-8, Boeing 787-9, Boeing 777-300ER, Boeing 777-200LR, Boeing 777-200 Freighter, Bombardier Q-400 double cabin with an average fleet age of five years.
Ethiopian Airlines is the first airline in Africa to own and operate these aircraft and it is currently implementing a 15-year strategic plan called Vision 2025 that will see it become the leading aviation group in Africa with six business centers: Ethiopian International Services; Ethiopian Cargo & Logistics Services; Ethiopian MRO Services; Ethiopian Aviation Academy; Ethiopian ADD Hub Ground Services and Ethiopian Airports Services. Ethiopian is a multi-award winning airline registering an average growth of 25% in the past seven years.