European stocks slumped on Monday after U.S. President Donald Trump unexpectedly said at the weekend that he will increase tariffs on Chinese goods, pushing down shares as investors sought safety in less directly affected assets. 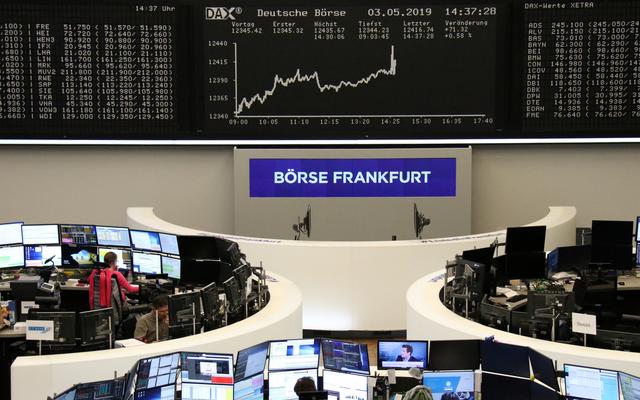 Trump said Washington would hike tariffs on $200 billion worth of Chinese goods effective Friday and target hundreds of billions’ worth of goods soon.

The move, which came a few days after he praised his relationship with Chinese President Xi Jinping, caught most investors flat-footed.

“These threats were exactly the opposite of his statements just last Friday, where he said that talks between Washington and Beijing to end the trade war were going ‘very well’,” wrote economists at UBS.

“If the President follows through, the Chinese government will almost surely retaliate.”

The pan-European STOXX 600 index ended 0.9 percent lower, in its worst day in about a month and a half.

Trump’s tweets knocked at a pillar of support – trade optimism – which had underpinned the rise of about 15.6 percent the STOXX 600 had enjoyed in the year through Friday.

German shares fell 1 percent in their worst one-day showing in 6-1/2 weeks. The index had tumbled as much as 2.2 percent during the session.

Stocks in Spain, Italy and France, fell from 0.8 percent to 1.6 percent. Equity markets in Britain remained shut for a bank holiday.

Stocks of auto-makers and their suppliers, generally sensitive to U.S.-China trade ructions, fell 2.1 percent to lead broad-based declines among the STOXX 600’s sub-sectors.

Auto supplier Stabilus shed 5.7 percent after cutting its full-year guidance due to the ongoing weakness in the global auto industry.

Stocks of chipmakers such as Siltronic, STMicro and AMS, which are also highly sensitive to trade war news, shed between 3 percent and 5.3 percent.

Paris-listed Total shed 2.4 percent, amid broad weakness in oil prices seen earlier in the day. The French energy major said it had reached a binding deal with Occidental Petroleum Corp to buy a clutch of Africa-based assets belonging to Anadarko Petroleum Corp.

Telecom stocks dipped marginally, with the sector index supported by Norway’s Telenor. The Oslo-listed stock climbed 4.7 percent after the firm and Malaysia’s Axiata Group said they were in talks to form a jointly owned Asian telecoms firm.

On Sunday, British Prime Minister Theresa May stepped up calls for Labour Party leader Jeremy Corbyn to agree a cross-party deal to leave the European Union, following poor results for both parties in local elections on Thursday.