By Samson Echenim
Indications have emerged that the Comptroller-General of Nigeria Customs Service, Hameed Ali, a retired army colonel, has moved against international trade rule by ordering Customs officials to examine containers and other cargoes destined for inland container ports in the northern part of the country. 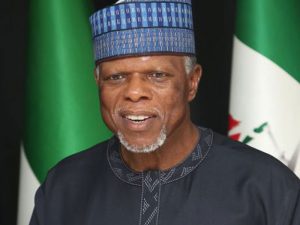 While commissioning the Kaduna Inland Container Terminal earlier this year, President Buhari had directed the Nigeria Customs Service and all other agencies in the trade chain not to introduce trade restrictions and bottlenecks that would hinder the patronage of the dry ports by shippers and state governments who would be importing or exporting through the inland ports.
However, in what appears to be a deviance to Buahri’s directives and to international trade rules, Ali has ordered that all containers and other cargoes destined for the dry ports should be opened and examined at the seaports in Lagos before continuing to the inland ports.
Business a.m reliably gathered that the Nigeria Customs Command in Apapa Port, Tin Can Island Port, PTML, Ikorodu Port, Murtala Mohammed Airport and the Federal Operation Unit Zone A, have all been directed by the Customs boss to hold, open or unseal and examine all containers and other cargoes destined for inland dry ports at Kaduna and Kano.
The Inland dry ports are ports of origin and destination, meaning that goods are exported and received at the dry ports. There are Customs officials present at the inland ports who do the do the examination on the cargoes at the dry ports.
Inland ports are established to ease trade and to decongest the seaports while ensuring that a country’s ease of doing business is improved.
But Ali said it had come to his “knowledge that the current procedure of non-examination of foreign cargoes destined for Inland container terminals (Kaduna and Kano) have been largely influenced by illegal activities.”
To curb the alleged illegality, the Customs CG ordered that “all importation be unsealed, opened, examined to ascertain the content before exiting the mother port.”
With the directive by the Customs CG, foreign direct investment is at stake as the move will discourage foreign investors in the northern part of the country.
President Muhammadu Buhari in January 2018, inaugurated the Kaduna Inland Dry Port and warned the Nigeria Customs Service and port officials against frustrating the effective use of the facilities.
Inaugurating the facilities in Kaduna, Buhari said the customs and the port officials must make the facilities work and not to frustrate business, commercial and industrial enterprises with unnecessary bureaucracy.
He said: “It remains for Customs and Ports officials to make these facilities work and not to frustrate business, commercial and industrial enterprises with unnecessary bureaucracy and inflicting on them delays and hardships, thereby defeating the object of the whole exercise as has happened in the past.
“Make these facilities work this time.”
According to the President, the hinterland business community has waited for too long for such facility that has tremendous potentials to ease the way of doing international business for the interior based importers and exporters.
He said the development of Inland Dry Ports was an important factor in the nation’s economic development efforts.
He said: “As Ports of origin for exports and ports of destination for imports, the Inland Dry Ports will accelerate the implementation of our economic diversification policy.
“The concept of Inland Dry Port has gained widespread importance with the changes in international transportation as a result of the container revolution and the introduction of door-to-door delivery of cargo.
“It provides importers and exporters located within the nation’s hinterland, especially industrial and commercial outfits, access to shipping and port services without necessarily visiting the seaports.
“It also enables them to process clearance of their import cargo and take delivery of their raw materials and machinery close to their places of business, ” he noted.
President Buhari also said the Dry Ports would provide exporters the much needed facilities to process, package, consolidate and forward their exports to their customers all over the world without having to physically be at the seaports.
According to him, this replicates the port economy in the various centres where the dry ports are located inland thereby generating employment and contributing to the ease of doing business.
In addition to the Kaduna Inland Dry Port, six other Inland Dry Ports in Ibadan, Aba, Kano, Jos, Funtua and Maiduguri, which had also been gazetted, were at various stages of completion.