All eyes are now focused on Aba, an effervescent city of over two million people and Nigeria’s signpost for indigenous industrial, manufacturing, fabrication, business and commercial activities for a long-expected rebirth with its multi-billion-dollar economy coming on stream as Geometric Power’s Aba Power Limited (APL) turns on its World Bank-financed electricity plant later this year. 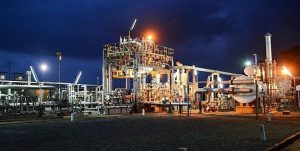 The indigenous manufacturing hub has for long been expected to be given a Marshall Plan treatment by successive Nigerian governments to enable it punch in accordance with expectations but it had unfortunately been let down by the quality of governance provided at the centre and state level. It had faced a lot of problems, majorly the lack of electricity supply and lack of other infrastructure that seem to make it impossible for it to live up to its international billing.

But the hope of a possible rebirth is coming as Geometric Power, operated by Barth Nnaji, a former minister of power and a professor of robotics, received seven technical experts from the international arm of the National Rural Electrification Cooperative Association (NRECA) based in Arlington, Virginia, USA.

Led by Dan Waddle, senior vice president, the NRECA team will be involved in training and development of APL’s technical workforce, most of whom were head-hunted from the defunct Power Holding Company of Nigeria (PHCN) and Enugu Electricity Distribution Company (EEDC), a struggling company like its 10 counterpart distribution companies (DisCos).

The NRECA team will work at Aba Power Limited for five years. Their arrival has been described by Patrick Umeh, APL’s managing director, as a huge boost to Nigeria’s electric power sector.

“The arrival of this high-quality technical team in Nigeria which will work at the Aba Power Limited for five years is a huge boost to the country’s electric power sector,” said Umeh, who used to be at the Los Angeles Water and Power Corporation in California, USA, before joining the Nigerian Electricity Regulatory Commission (NERC) as a commissioner.

“We are unwavering in our commitment to make Aba Power a truly world-class company in service delivery to nine out of the 17 local government areas in Abia State,” he said.

Umeh explained that the NRECA team will devote themselves to operations and maintenance at the firm, adding, “Our staff need to update their technical knowledge and skills, just as they need to have new values and a new orientation in terms of service delivery in the 21st century.”

Aba Power is Nigeria’s newest electricity distribution company. But it is not cast in the mould of the 11 DisCos, which have been struggling since they acquired PHCN’s unbundled companies. Each DisCo grapples with huge debts amid poor performance. They heap the blame on the shoulders of the federal government.

APL says it would adopt key performance indicators (KPIs) both in its contract with NRECA and its operations to demonstrate beyond reasonable doubt that not just the firm but also the Nigerian people have full value for their money.

“Our contract with NRECA International is by no means cheap, but no sacrifice is considered too much for the people of Aba and environs,” Umeh said.

NRECA has for decades been involved in development of the electricity sector in countries such as Bangladesh, Tanzania, Haiti and Venezuela. It boasts of a rich experience in emerging markets, in Africa and elsewhere, including Ghana, Ethiopia, Angola, as well as Liberia. Umeh believes NRECA would not have any difficulty adapting to the Nigerian environment.

Formed in 1942, NRECA services over 90 electricity cooperatives across the United States, while NRECA International, founded in 1962, has provided electricity to over 160 million people in 43 countries around the globe.

The opening of Aba Power Ltd has been long in coming and expectations are high among the city’s over two million population, vibrant city chamber of commerce and industry (ACCIMA), tens of thousands of small and medium-scale footwear, leather and allied products manufacturers, among others.

Andy Ubah Obasi, a former president of Aba Chamber of Commerce, Industry, Mines and Agriculture (ACCIMA), told Business A.M. that Geometric Power Limited’s takeover of Aba ring-fence and the coming of an independent power plant in the Osisioma area of Aba would incite industrialization not just in Aba but the entire South-East region and Nigeria at large.

Okezie Ikpeazu, Abia State governor, described the incoming power project as the “fulcrum upon which the industrial development of Aba, Abia State and the South East zone will revolve”.

“Two years from today, the story of economic development in Aba and Abia State will take a completely different turn. Things will never be the same again around here; and anyone who hasn’t concluded plans to have a presence here is already late,” the governor said.

He also assured that the state government would construct the road leading to the electricity plant.

The task before Geometric

Despite the optimism, feelers are that Geometric Power’s Aba Power Ltd would have a big task marketing its electricity to tens of thousands of consumers who had since relied on alternative sources. Today, a maze of power lines are visible within the commercial city that had suffered long years of electric power woes. It will be left for Geometric Power to show the Aba business community what it has to offer.

“If not for the issue that came up between EEDC and Geometric Power, there wouldn’t have been any vacuum for people to seek alternative sources of power. If Geometric Power comes on, the burden will be on them to show us what they have,” Obasi said.

“If the evidence is there that they have reliable power, and the tariff is also good, many Aba business people might consider switching over to their system. It is very difficult to walk up to someone and ask him to change from what he is used to without authentic and concrete evidence. As a chamber of commerce, we will gather the facts and present them to the business community, and they in turn, make their decisions,” he said.