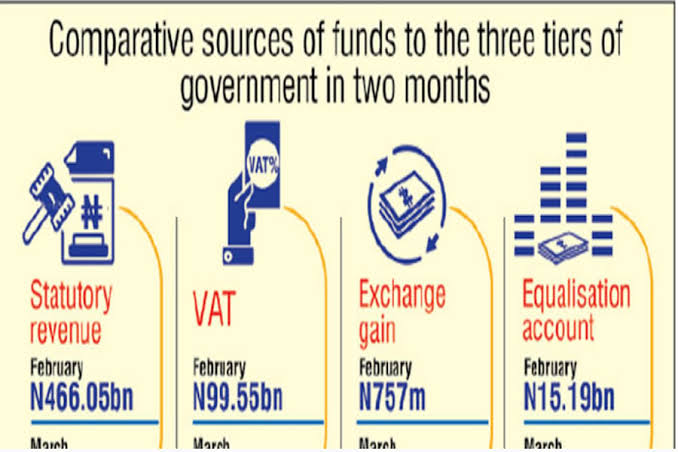 The allocation was made on Wednesday shortly after the Federation Account Allocation Committee meeting.

The meeting was held through virtual conferencing due to the lockdown in the country caused by the COVID-19 pandemic.

A statement issued by the office of accountant general of the federation said that the N780.92bn was made up of statutory revenue of N597.67bn; Value Added Tax of N120.26bn and exchange gain of N62.92bn.

From the statutory revenue of N597.67bn, the Federal Government received N217.77bn; state governments, N110.45bn while the local government areas got N85.15bn.

In addition, the statement said the sum of N32.29bn was given to the oil producing states based on the 13 per cent derivation principle while N151.98bn was allocated to the revenue generating agencies as cost of revenue collection.

From the VAT revenue of N120.26bn, the statement said the Federal Government received N16.77bn; state governments received N55.92bn, while the LGAs got N39.14bn.

It added that the sum of N8.41bn was given to revenue agencies as cost of collection.

In terms of the exchange gain revenue of N62.98bn, the statement said the Federal Government received N29.78bn, the state governments, N15.1bn, and the LGAs, N11.64bn while the oil producing states got N6.45bn.

It put the balance in the excesscCrude account at $72.22m.

With Nigerian bond yields at 14%, it seems nobody wants equities