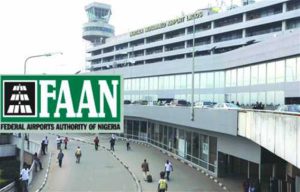 Shin-Aba however, said FAAN had put measures in place to ensure safety and security at both land and air-sides of the airport.

Speaking with journalists on Friday, the MMIA manager said FAAN, in conjunction with the Nigerian Air Force and the Police frequently patrol the air-side to ensure that the air-side is safe for aircraft to land and take off, adding that the onus of ensuring that air and land sides are safe and secured lies with FAAN.

She said, “Based on this challenge, what we are doing now is that FAAN always ensure that bushes are cleared regularly so as not to give opportunity for unwanted persons to come into the air-side.

The airport authority has put in place patrol teams to follow aircraft when they land and taxing and also when they are taxing to take off, as part of measures to ensure that aircraft are not tampered with.

We have also put in place another security team that escorts aircraft to park at the apron, adding that the team follows aircraft at reasonable distance until they park.”

On the Close Circuit Television (CCTV), Shin- Aba said that the agency has a little challenge, especially when it is dark and that during that period the visuals may not be clear enough. She however stated that the CCTVs at the airport adequately cover airport terminal and other areas apart from the air-side.

In her words, “The only place we have issues is the airside, other places are covered.”

In the interim, the airport manager, stated that FAAN had introduced vehicles with dash cameras, adding that more of these vehicles would be imported and that in the long run the thermal and infrared cameras would be provided in the next few weeks and that she said is another layer of security.

“We are trying to reduce access control. We have done a good job but because our airport is in the city everybody wants to visit the airport. We are mostly concerned about the airside to ensure aircraft are safe,” she hinted.