The U.S. Federal Reserve, leaning back against pressure from President Donald Trump to slash interest rates, is expected to leave borrowing costs unchanged on Wednesday as it maintains a ‘patient’ monetary policy stance amid strong economic growth. 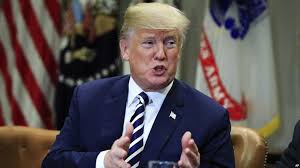 Trump, who has accused the U.S. central bank of undercutting his efforts to boost economic growth, said on Twitter on Tuesday the Fed should cut its key overnight lending rate by a full percentage point and renew the quantitative easing program that saw it pump trillions of dollars into the economy in response to the 2007-2009 financial crisis and recession.
Fed officials were in the middle of their latest two-day policy meeting when Trump made his comments.
The unorthodox advice – more in line with what economists on the far left of the political spectrum might advocate – is likely to go unheeded by a central bank that views its current target interest rate as roughly where it should be to keep the growing U.S. economy on an even keel.
The U.S. government reported last week the economy grew at an annualized pace of 3.2 percent in the first three months of the year, surprising Fed officials who had expected the data to signal a slowdown.
U.S. employers added nearly 200,000 jobs in March, evidence of continued strength in the labor market and a sign as well that the Fed’s four rate hikes in 2018 had not constrained the economy.
With no clear reason to cut or raise rates at this point, the focus on Wednesday will be on whether the policy-setting Federal Open Market Committee provides any new signal about its likely plans, said Cornerstone Macro analyst Roberto Perli.
“There will probably be discussions at this meeting as to what the threshold should be for bringing rates down,” Perli wrote in a note on Tuesday. “But given the diversity of opinions and the lack of a clear need for an imminent decision, it seems unlikely that the (FOMC) will agree to something specific now and be able to send a clear signal.”
The Fed raised rates four times last year, lifting its policy rate to a range of 2.25 percent to 2.50 percent. After its last rate hike in December, the Fed faced particularly sharp criticism from Trump.
Some central bank policymakers have cited ongoing weak inflation, still well below the Fed’s 2 percent target, as a sign rates may be too high.
The Fed is due to release its latest policy statement at 2 p.m. EDT (1800 GMT). It will not provide new economic or interest rate projections, but Chairman Jerome Powell is scheduled to hold a press conference shortly after.
One technical change officials may make is to trim the amount of interest paid to banks on excess reserves held on deposit at the Fed to 2.35 percent from 2.40 percent. The aim would be to keep the targeted federal funds rate from moving above its current range.
The federal funds rate, which banks charge each other for overnight loans, rose to near the upper level of that range this week, as banks competed more aggressively to meet their reserve demands.