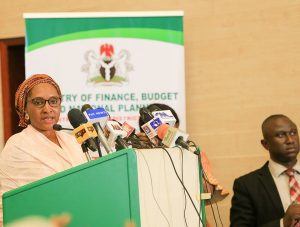 The presentation shows the Federal Government has projected a Gross Domestic Product (GDP) growth of 2.93 percent and a revenue profile of N7.634 trillion for the 2020 budget.

Also, the minister said the Federal Government will propose to the National Assembly a total sum of N9.79 trillion as expenditure for the 2020 budget, representing an increase of 9.75 percent over N8.916 trillion spending for 2019.

The framework targets oil production of 2.18 million barrels per day, as other key forecast of the MTEF places oil price at $55 per barrel, official exchange rate of N305 to a dollar and inflation rate of 10.81 percent.

Giving reasons for the forecasts, Ahmed explained that all the assumptions were done in consistency with the goals of the Economic Growth and Recovery Plan (ERGP).

A lower benchmark oil price of $55 per barrel is projected in 2020 against $60 per barrel in 2019. This is considering the expected oil glut in 2020 as well as the need to cushion against unexpected price shock. Also the Organisation of Petroleum Exporting Countries (OPEC), International Energy Association (IEA) non OPEC production growing by around 2 million barrels this year, and by next year.

The minister said capital expenditure for 10 top GOEs have been put at about N188.23 billion; grants and donor-funded projects (N36.4 billion), and multilateral/bilateral project-tied (N328.13 billion).

How we will fund deficit- Minister

On deficit financing, Ahmed said the government plans to mobilise additional financing from the sale of government property, proceeds from privatisation, sale of non-oil assets, multi-lateral and bilateral project-tied loans and new foreign and domestic borrowings.

In her overview of the proposals, the minister said the draft MTEF showed the country was facing significant medium-term fiscal challenges, especially with respect to revenue generation and rapid growth in personnel costs.

To reverse the challenges, she said key reforms under the strategic revenue growth initiative will be implemented to boost revenue collection and expenditure management.

To further the objective of greater comprehensiveness and transparency in the budget process, she said the government has proposed to reflect the revenue and expenditure of government-owned enterprises and multi-lateral/bilateral projected loans and related expenditures in the 2020 budget.

The finance minister also said that the Federal Government will begin deduction of the N614bn bailout funds to state government beginning from the next Federal Accounts Allocation Committee (FAAC) release this month.

The minister  clarified that the refund to be made by states will not be used to fund the 2020 budget.

“N614bn is not part of the revenue to fund the 2020 budget. It is a loan which was facilitated by the Central Bank of Nigeria.

Therefore, we will start deducting from the next FAAC allocations to states and then we remit to the Central Bank because it is a loan,” she explained.

In the area of recurrent expenditure, the minister lamented the personnel cost at over 3.0 trillion (Inclusive of Pension Cost) which has continued to rise. “Personnel cost is on the rise at over N3 trillion which is serious issue. The Federal Government is however taking steps to contain the raising personnel cost, including an October 2019 deadline by Mr. President for all MDAs to implement Integrated Personnel and Payroll Information System (IPPIS).

Therefore any Department or Agency of government that is not captured on the IPPIS will not be getting salaries starting from October 2019. “Also the rise in the personnel cost and overhead cost can be attributed to rise to the addition of five new ministers which has further increased the recurrent cost,” she said.

On Nigeria signing the agreement establishing the African Continental Free Trade Area (AfCFTA), Ahmed foresees tremendous opportunities for the country in the medium term, noting that the agreement could become a huge nightmare if the right policies and actions are not implemented to boost Nigeria’s competitiveness.

Ahmed said Africa’s largest oil exporter is producing roughly 2.3 million barrels per day (bpd) of crude oil and condensates. It has agreed on a cap of 1.685 million bpd of crude oil with the Organisation of the Petroleum Exporting Countries (OPEC).