The Federal Government on Thursday said that it had recovered about N605bn through the implementation of the whistle blower policy. 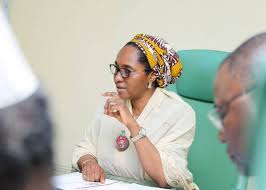 Zainab Ahmed,the minister of finance, gave the figure during a media briefing on the activities of the ministry.
The whistle blower policy which was inaugurated in December 2016, was aimed at addressing the issues of corruption in the management of government resources
The event which was held at the headquarters of the ministry of finance was attended by other heads of agencies under the ministry of finance.
READ ALSO: Senate confirms Emefiele for second term as CBN gov
They are the Comptroller-General of Customs, Hameed Ali, Director-General of Debt Management Office, Patience Oniha, Managing Director of the Asset Management Corporation of Nigeria and the Director-General of the Securities Exchange Commission.
The finance minister described the whistleblower policy as a huge success, adding that the N605bn so far recovered was an improvement over the amount previously recorded.
She said, “The whistleblower policy of government subsists and it is still being implemented. The total amount of collection that has been made through various efforts in the whistleblower policy is about N605bn.