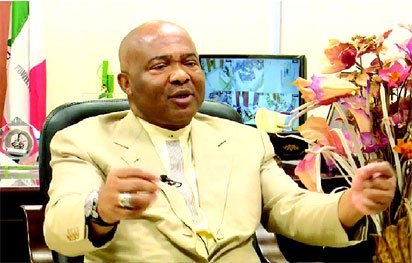 An eight-member financial advisory committee (FAC) in Imo headed by Abraham Nwankwo, former executive director of Debt Management Office (DMO) and other financial experts and consultants has asked Imo State Governor, Hope Uzodinma, to order nine deposit money banks to refund to the state more than N112.82 billion (or N112,824,333,367.42), being locations of and balances on all bank accounts operated by the state government, its ministries, departments and agencies (MDAs) under the immediate past administration of Rochas Okorocha as at 29 May, 2019.

The amount was arrived at after a forensic audit of all financial transactions of the state government’s sources of funds, disbursements/applications of state resources, ascertaining the propriety of charges levied on accounts, interest payment on loans and deposits, review of Imo Board of Internal Revenue (IMSBIR) and governance/financial reviews of key agencies of government.

A copy of the committee’s report sent to Governor Uzodinma, which was seen by business a.m., shows that the FAC had given the nine banks each 30 days to refund the entire money to the state government. But sadly, at the expiration of the deadline, majority of the commercial banks were yet to respond to the claims.

“When our committee had its last meeting on January 14, 2020, a number of measures were being considered to ensure that these claims were pursued. Incidentally, these options required the approval of the Governor, and had to be aborted following the change in guard on that fateful day. We consider the amount involved as not just significant, but humongous, and its recovery is certainly deserving of whatever attention or effort that may be necessary,” the report, signed by Nwankwo (Ph.D) and Opara-Ndudu, said.

The committee report equally said that based on its work, it was aware that Imo was in dire financial straits; and the recovery of the aforementioned money would go a long way in augmenting the resources needed for the implementation of the state’s development agenda.

Checks by business a.m. indicate that Imo was badly managed by the outgone Rochas Okorocha administration, plunging the oil-rich state into deep indebtedness. For upwards of 77 months, pensioners were not paid their pensions amounting to over N57 billion. Most Imo workers were paid between 50 to 70 percent of their salaries.

A report on Nigeria’s sub-national states’ indebtedness published last year by the Economic Confidential showed that as at 2018, Imo owed $51.51 million (or N21.42 billion as external debts, and N98.78 billion as domestic debt; bringing the state’s total indebtedness to N120.208 billion. Today, the state pays several billions in debt servicing, which are deducted upfront from its monthly federal accounts (FAAC) allocations.

The committee also said that, if the N112.82 billion recovery process was aggressively pursued with the required will, it would make it unnecessary for the state to have a recourse to bank borrowings in order to fund the provision of infrastructure and sundry services.

The members said in a letter to Governor Uzodinma that, they “feel a compelling obligation to bring this very important issue to your attention. The pursuit of these claims and recovery of the outstanding claims require political will and leadership which can be provided by you.

They however, warned that “it would be a grave and historical insult, assault and financial rape of Imo State, if the recovery of the claims from the banks was not vigorously pursued whatever excuse; adding that in the matter (of the fund recovery) history beckons on Governor Uzodinma to defend the interest of Imo State.