The Naira weakened by N10 on the street closing at N380 to the dollar, down from the N370 it traded in the previous week. On the flip side, turnover plunged by 32.2 per cent week-on-week in the Investors & Exporters Window (I&E) to a weekly average of $95.2 million against the $140.3 million in the prior week. 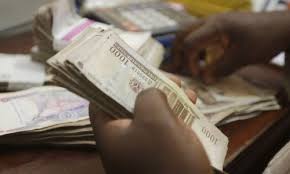 Further afield, money market rates remain in single digits, albeit lofty, following outflows due to settlement of the Bond on Friday. The Overnight and Open Buy Back closed at 4.3 per cent and 3.3 per cent from 0.6 per cent and 0.5 per cent respectively at the close of trading last week.

Also, activities in the fixed income market returned order-driven following profit taking witnessed in the previous week. Average yield across the fixed income market plunged by six basis points week-on-week to settle at 1.4 per cent from 1.5 per cent in the prior week. The Nigerian Treasury Bill market remained flat for the week at 0.1 per cent as most trades were consummated within the market bid-offer spread.

Nevertheless, market turnover in terms of value spiked by 17.0 per cent was seen week on week. In a contrary tale, the OMO-bill market closed bullish for the week following increased bids across the curve buoyed by robust system liquidity. Consequently, pressuring average OMO-bill yield southward by 6 basis points week on week to 0.1 per cent from 0.2 per cent.

Moving on, investors stood at the side-line at the start of last week in anticipation of the outcome of the Bond PMA. However, activities picked up going into the close of the week, pressuring down the average bond yield by 11 basis points to 4.0 per cent from 4.1 per cent at the close of trading in the previous week. Meanwhile, the Debt Management Office (DMO) in its scheduled PMA, sold bonds worth N80 billion across the 12.50 per cent FGN MAR 2035 and the 9.80 per cent FGN JUL 2045 papers at marginal rates of 5.00 per cent (prev. 4.97 per cent) and 5.79 per cent (prev. 6.00 per cent) respectively.