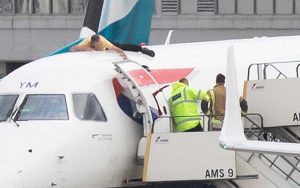 A recent report commissioned by the UK’s Committee on Climate Change (CCC) has been released, which recommends banning airline reward schemes and suggests that they stimulate demand for excessive air travel. It also goes on to propose enacting levies on people who fly too far, too often.

An estimate by a UK newspaper puts the number of frequent flyer programmes at 220 with an estimated total membership of 200 million worldwide.

“Given the scope for frequent flyers to have carbon footprints, many times that of the averageUK household, a lack of policy in this area is likely to be increasingly seen as inconsistent and unjust, and risks damaging public engagement with climate action,” the report declared.

The research itself was conducted by Richard Carmichael from Imperial College London and, while the CCC didn’t write the report and stated that it doesn’t necessarily agree with all of the outlined recommendations, the findings were used to inform its own report on how to achieve the nation’s Net Zero goals.

In June, the UK became the world’s first major economy to legally commit to achieving carbon neutrality by 2050 in order to fulfil its obligations under the 2016 Paris Agreement.

“Flying is a uniquely high-impact activity and is the quickest and cheapest way for a consumer to increase their carbon footprint,” the report said.

The concern isn’t really about the everyday citizen who takes an annual vacation or two, and the proposed measures wouldn’t much affect the average traveller. The proposals are aimed primarily at deterring frequent flyers from taking extra flights simply to earn miles or reward points, thereby maintaining their privileged status with airlines and retaining top-tier perks. CNN referred to such trips as “mileage runs”, and said that it’s a common practice among the jet-setting elite.

In the UK, it’s estimated that just fifteen percent of the population takes around 70 percent of all flights, and those travellers tend to be wealthier and less cost-concerned. Theirs would be the segment most affected by any restrictions or fees imposed on frequent flyers, as suggested levies would be based upon the total number of miles flown by each individual. It’s also worth noting that the study found that around 50 percent of UK citizens don’t fly at all in any given year.

The report suggested that such levies might induce travellers to take shorter flights, since fuel used in long-haul flights is reportedly more harmful to the environment, help shift consumer demand from planes to trains and raise funds that could be invested into research into low-carbon aviation technology.