Global: Global investor sentiment was mixed this week, in preparation for the Q1’22 earnings season. In Asia, focus was on the latest economic data out of Japan and China, as well as statements from Chinese government officials. President Xi Jinping of China announced that the government will maintain its COVID-19 policy and keep all existing restrictions in place as they combat the spread of the infection. In another statement, local media cited the China’s cabinet as saying it would timely use monetary policy tools and other measures to boost consumption. For the week, the Japanese Nikkei gained 1.05%, while the Shanghai Composite eased -0.34%. Moving to Europe, investor sentiment was more upbeat as major markets in the region closed well in the green w/w, despite the release of underwhelming inflation data out of the United Kingdom. On Wednesday, the Office for National Statistics reported, the UK’s Consumer Price Index (CPI) increased by 7% in March y/y. Finally, on Thursday the European Central Bank’s (ECB) Governing Council announced that it would leave interest rates unchanged. For the week, the German Dax eased 0.36% while the French CAC and Amsterdam AEX rose 1.75% and 0.54% respectively. Finally, moving to the United States, banking earnings started to roll in at the tail-end of the week. Goldman Sachs saw Q1’22 revenue come in at $12.93 billion, while Morgan Stanley saw Q1’22 revenue beat expectations at $14.9 billion. Citigroup saw revenue fall 2% q/q to $19.1 billion, with Wells Fargo Q1’22 revenue shedding 5% q/q to $17.6 billion. For the week, the NASDAQ and SP500 were down 2.16% and 1.29%, while the Dow Jones was up 0.12% at time of writing.

Domestic Economy: The Senate approved President Buhari’s request to increase fuel subsidy to ₦4 trillion. The increase was a result of the spike in the landing cost of PMS exacerbated by geopolitical tensions. This approved request substantiates our views that social dissent and election concerns could prevent the current administration from removing fuel subsidies in 2022. With the retention of fuel subsidies, we will continue to trade off resources that could be allocated to productive capital projects. This could worsen Nigeria’s fiscal sustainability ratios, even as Nigeria struggles to mobilize revenue and contain costs.

Equities: Nigerian equities ended the week on a positive note, as broad-based gains saw the NGX rise 1.99% w/w, led by gains observed in the Banking sector. In the banking space, ZENITHBANK led gainers rising 8.70% w/w as the sector rose 5.59% w/w. Gains in the space were broad based, with FIDELITYBK and GTCO rising 8.15% and 6.52% respectively. Moving to the Consumer Goods space, gains in NB (+11.82% w/w) and HONYFLOUR (+5.49% w/w) primarily drove the gains witnessed in the sector as it rose 1.89% w/w. Likewise, in the Oil and Gas space, investors remain keen on SEPLAT, as the oil explorer saw its stock price rise 2.60%, this helped the sector rise 1.59% w/w, with the positive sentiment filtering through the space. Finally, interest in JBERGER (+5.18% w/w) and WAPCO (+5.00% w/w) helped the Industrial Goods sector rise 1.55% w/w.

Fixed Income: This week, the fixed income market remained largely bearish, with pockets of buy-side activity seen on select days. In the bond market, we saw selloffs dominate the benchmark curve as a result, average yield rose 5bps w/w. Meanwhile, trading in the NTB market was tepid throughout the week, despite the PMA that held on Wednesday. At the auction, the CBN maintained rates on the 91DTM (1.74%) and 182DTM (3.00%) tenors, while the 364DTM bill saw a 15bps rate hike to 4.6% (previous: 4.45%). Finally, as investors sought to create liquidity, we observed sell-offs in the OMO space. Consequently, average yield in the space rose 14bps w/w. 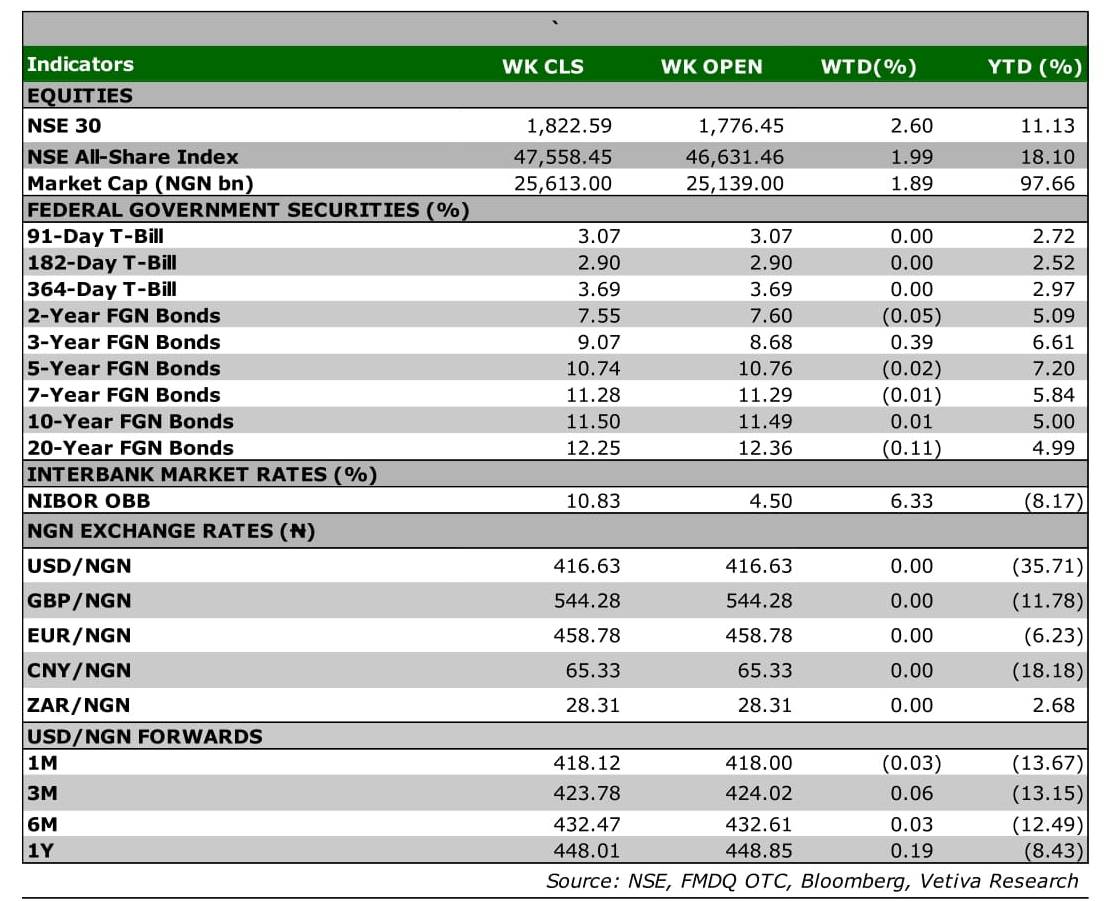 Equity market: Despite today’s profit taking in the banking sector, the NGXBNK closed as the week’s best performing sector with a 5.59% gain. We expect to see further profit taking in that space going into the new week amid this week’s record gain. We expect Q1 results of some companies to hit the market next week, and we anticipate this to drive market sentiments as well.

Fixed Income: To open next week, we expect the bonds market to trade in a similar pattern, due to a lack of catalysts to sway activity. Meanwhile, we anticipate bearish trading in the NTB segment, as investors react to the rate hike on the one-year paper.

In Q1’22, the Russian invasion of Ukraine was a big story. This, combined with the Fed’s rate hike, had a number of consequences for our coverage currencies: higher export earnings (Angola), higher import bills (Kenya), limited access to the international debt market (Ghana), alternative demand sources for Russian exports (South Africa), and the ability to raise external financing (Nigeria).

In Nigeria, the apex bank released a new supply management policy (RT 200 FX) to boost non-oil export inflows to the economy. In this report, we reviewed the impact of similar post-COVID FX policies and discovered that while most had no positive impact on the exchange rate, positive returns from a few policies fizzled out after six months.

Going forward, we believe the performance of SSA currencies in Q2’22 could continually be influenced by global monetary policy, geopolitics, and COVID-19 developments. We still see room for election-related weakness in the Kenyan Shilling and the Nigerian Naira. The Angolan Kwanza, which is also exposed to election-related risk, could be shielded by higher oil prices and interest rates. High commodity prices could continually support the Angolan Kwanza and the South African Rand. The Ghanaian Cedi could take a breather should the apex bank keep the real rate of return positive by adjusting the policy rate as inflation rises.

In Q2, the escalation of Ukraine-Russia tensions could keep oil prices above $100 per barrel (Bull case: $110/barrel). We note that while the release of oil from the strategic reserves of the United States could boost supply to an extent, this would be insufficient to subdue oil prices. The International Energy Agency (IEA) has confirmed that Biden’s reserve plan (1 million b/d) may replace only a third of lost production from Russia (3 million b/d) in April. This leaves a 2 million b/d deficit. However, a possible total lift-off of sanctions on Iran could see oil supply rise by 3.8 million b/d. While this could cover the shortfall, the likelihood of outright lift-off is slim, given the ongoing extensive negotiations. On the flip side, we believe the outbreak of a deadlier variant of COVID-19 could be the ultimate oil price depressant, which could be heralded by the current global relaxation of COVID-related restrictions and zero-COVID strategy in China.

Given this backdrop and judging by market expectations, which is proxied by non-deliverable forwards (NDFs), the outlook for SSA currencies remains bearish. This mirrors the expectation that higher US interest rates and higher oil prices could induce risk-off sentiments and weaker currencies. Should the US increase interest rates, the monetary authorities in South Africa and Ghana could brace for more aggressive rate hikes to subdue inflation and external pressures.

Specifically, we see room for election-related pressure on both the Kenyan Shilling and the Nigerian Naira as both economies are in an electioneering season. Rate hikes may not be politically favourable, but they may be necessary to cushion external pressures and induce capital flows. Angola, which is equally in an electioneering season, could retain its winning streak on account of higher oil prices, currency liberalization, and high interest rates. However, fading demand from China could be a key risk should widespread lockdowns re-emerge.