What that means is advertising that “may not look like advertising,” Eastwood said during the morning’s first session. “It’s advertising while doing good.” 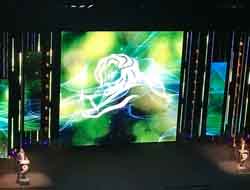 For pharma, it looks a lot like the beyond-the-pill advice consultants have been giving for years. Don’t think about marketing a therapy; think about solving a patient’s problem. But though Eastwood’s examples all featured consumer brands, that’s exactly the kind of work healthcare marketers should be doing, too, he said.

“The reality is that pharma and health are closer to doing good anyway, that’s just part of what they do,” he said in an interview later. “Looking for opportunities to serve the patient in a creative way is what we need to do in pharma as well, not just, ‘let’s go and sell this drug.’

“But there’s a huge trust gap because people think pharma companies are just out to make money. The more they can do that supports their customer base, which is patients, the more quickly we’ll erode that.”

For instance, McCann works with Kwality Dairy in India, where Vitamin D deficiencies are common; 80% of children in Delhi are deficient. The dairy’s milk is fortified, but that’s not enough, so the company launched a campaign for schools to move the traditional, outdoor morning assembly to noon, when brief sun exposure could have a big effect on vitamin D levels.

The campaign invited schools to a launch event and the idea took off. The media coverage by itself was worth $2 million, Eastwood said.

“We didn’t make a TV commercial or run print ads,” he said. “We looked at a problem and how we could solve it, and showed that Kwality Dairy cares about kids.

“But it was an ad, make no mistake,” he added. “You better believe it made parents want to buy that milk.”

Eastwood recently made the leap from consumer advertising to healthcare, and he sees the field as a natural for this sort of promotion.

“There’s so much opportunity to do good” in healthcare marketing, he said. “It’s not all going to happen today,” he said, but when a client opportunity lands at McCann Health, he’d like the follow-up question to be, “’How can I make this more about making the world a better place?’”

“It’s not hard because mentally they’re already in that place, they just don’t know how to do it,” he said. “I think they recognize that, so it’s incumbent on us (as agency partners) to come up with ideas that help them achieve their goals.”