Bill Gates, founder of the Bill & Melinda Gates Foundation, Paul David Hewson, popularly called Bono, a renowned activist and co-founder of ONE, and Bismarck Rewane, popular Nigerian economic analyst, have praised Aliko Dangote, founder of the Aliko Dangote Foundation following his naming by Fortune magazine as one of the Earth’s greatest leaders for 2019. 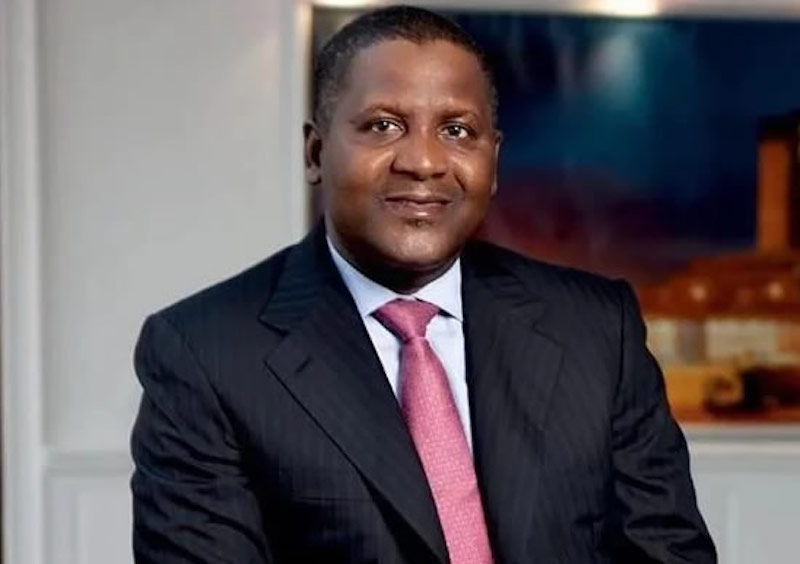 Dangote, a foremost philanthropist and richest man in Africa, was rated 11th of the 50 World’ Greatest leaders.

The rating by the Fortune Magazine, an American multinational business magazine headquartered in New York City, United States was released recently and focused mainly on the businesses run by the men and how they have used it to impact their society positively.

The time-tested magazine, which first edition was published in February 1930, said the world’s greatest leaders both men and women are transforming the world and inspiring others to do so in business, government, philanthropy and the arts.

“These thinkers, speakers, and doers make bold choices and take big risks- and move others to do the same”, the magazine declared.

This is the first time Fortune magazine is recognizing and including Aliko Dangote in the annual ranking. Specifically, Dangote having popped up in the magazine’s radar earned nomination after being adjudged as having used business to acquire wealth and who is now converting his wealth into impactful philanthropy through his Aliko Dangote Foundation.

The ranking of Dangote as one of the greatest business leaders has attracted comments by eminent persons around the world who described him as worthy of the nomination going by his business acumen and philanthropic gestures.

Global business giant and founder of Bill and Melinda Gates Foundation, Bill Gate extolled the efforts of Dangote in making businesses play roles in provision of sound public health through his various interventions in health care issues especially in the fight against malnutrition and routine polio.

Gates, who himself was ranked along with Dangote, said “Aliko Dangote, through his leadership at the Aliko Dangote Foundation, is a key partner in the Polio eradication effort, strengthening routine immunisation and fighting malnutrition in Nigeria and across Africa. Aliko bridges the gap between private business and public health in a unique way and our shared belief that Nigeria will thrive when every Nigerian is able to thrive drives our partnership.”

Renowned activist and co-founder of ONE, Paul David Hewson, popularly called Bono said he was not surprised at Dangote’s feat globally, saying his vision is as big as the African continent.

Bono, a global campaigner on taking action to end extreme poverty especially in Africa said: “Aliko has a vision just the size of his continent, but with humility of somebody who has just started his first job. It’s no surprise to me that Fortune would recognise his leadership because we have seen first-hand, through his service on ONE’s Board, the benefits of his wise counsel and grace.”

Also, the popular economic analyst, Bismark Rewane stated that “Aliko remains understated but very potent and Africa’s most successful and decorated entrepreneur. He is a global financial and managerial behemoth.”

Dangote as the Africa’s richest – worth $16.4 billion, according to Bloomberg – and the four publicly traded companies under the umbrella of his Dangote Industries now account for about a third of the value of the Nigerian stock exchange.

That wealth is based on a big bet on Nigeria’s economic independence: Dangote’s peers give him credit for helping the country become self-sufficient in the sectors in which his companies compete (cement, agriculture and mining)

The Aliko Dangote Foundation (ADF) is the Philanthropic endeavor of Aliko Dangote. The main objective of the Foundation is to reduce the number of lives lost to malnutrition and disease. The Foundation is poised to combat Severe Acute Malnutrition (SAM) in children, as the core of its programming. It has also resolved to use its investments in health, education, and economic empowerment to help lift people out of poverty.

It would be recalled that Dangote was last year ranked among 75 most powerful persons on the planet, ahead of the Vice-President of the United States of America, Mike Pence.

Aliko Dangote has been named among most powerful persons in the world for the past five consecutive years.  According to the Forbe’s 2018 ranking of the World Powerful people, Dangote ranked among world leaders like Xi Jinping, the Chinese President, Vladimir Putin the Russian President and Donald Trump, the President of the US, all of whom were ranked first, second and third respectively.

He was the only Nigerian on the list and one of the only two Africans who made the list with the other being the Egyptian President, Abdel Fattah el-Sisi, who was ranked 45thmost powerful.

In the same vein, he was named among the 100 most influential personalities in the world in 2018 by Time Magazine, leading business broadcast organisation. The CNBC had earlier in same year ranked Dangote as one of the 25 people which have had most profound impact on business and finance worldwide.

Dangote stepped up his humanitarian activities recently spending billions of Naira to build hospitals and critical hospital equipment, the lack of which has forced Nigerians of means to seek medical attention abroad.

He also donated a N1.2 billion Business School complex to Bayero University in Kano and another one for the University of Ibadan Business School. Last month he donated 10 blocks of hall of students’ hostel that can accommodate 2,160 beds to the Ahmadu Bello University, Zaria, Kaduna state

The business mogul has continued through the Foundation by disbursing N10 billion to vulnerable women across the 774 local governments in the country.

Dangote made a donation of $2 million to the World Food Programme as part of efforts to help Pakistani nationals devastated by floods in the year 2010.

Aliko Dangote was made the chairperson of the Presidential Committee on Flood Relief, which raised in excess of N11.35 billion, of which Dangote himself contributed N2.5 billion, an amount higher than the entire contribution from the 36 state governors in Nigeria.

So far, the Foundation has spent over N7 billion in the troubled North Eastern part of Nigeria to see that the Internally Displaced Persons as a result of the activities of insurgents, are re-integrated back to the bigger society.