“Follow orders at the departure gate and you will fly away faster,” that is the essence of a new campaign from Gatwick airport, as it begins a trial on how to get everyone on planes more swiftly and less stressfully. 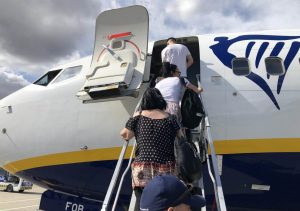 The Sussex airport, which is second-largest in Britain (behind Heathrow) is conducting an experiment at Gate 101 of the North Terminal.

Instead of the usual blunt division into travellers who have paid extra to board first, and those who have not, ground staff are prescribing exactly the order in which passengers should take their seats.

The trial is taking place on narrow-bodied Airbus A320 aircraft with six seats across.

The “turn” of an aircraft – the time between arrival on the stand and departure – is crucial to the efficiency of the airport and airline. The shorter it is, the more productive are the expensive assets of planes and departure gates. But a significant bottleneck is getting everyone on board and settled.

The most efficient system is theoretically to fill from the back and “outside in”. Passengers in the last row, typically 30, are boarded first, and those with window seats (A and F) take their places ahead of passengers in the middle (B and E) and with aisle seats (C and D).

That pattern is disrupted if significant numbers of families are booked on a particular flight. Once children and parents intervene, the optimal strategy falls apart.

Instead a more complex game plan comes into play. Passengers board by rows, but gate staff leave a two-row space to allow space to get everyone settled.

Gatwick claims that modelling for the gate 101 tests show that boarding can be 10 per cent faster when it is optimised.

AbhiChacko, the airport’s head of enabling technologies, said: “By communicating to passengers better and boarding passengers by seat number, we also expect to make the whole boarding experience more relaxing and, potentially, prevent large numbers of passenger rushing forward at any stage.”

Passengers clearly prefer to board by “air bridges,” especially during inclement weather. But evidence shows that a more efficient system is the Ryanair approach: make passengers walk up stairs at either end of the aircraft, as indicated on their boarding pass.

Gatwick’s Gate 101 experiment aims to show that a well thought-out and executed plan can be just as efficient.

But airlines including easyJet and Ryanair make money out of selling the right to claim a seat (and hence space in the baggage locker) before other passengers, with their “speedy boarding” and “priority boarding” extras respectively.

Conversely, British Airways does not allow those on its lowest “basic” fares to board until the end.

They have not been over-enthusiastic about the experiment, with an easyJet spokesperson saying: “A small number of easyJet flights that use Gate 101 are taking part in the trial initially.

“This isn’t something we are looking to implement across our network but will work with Gatwick to study the results of their trial when it closes.”

Gatwick’s two-month experiment may show whether it is worth the carriers abandoning their commercial strategies in exchange for faster turns, and airlines and airports across the UK will be watching intently for the outcome of the Gate 101 effect.