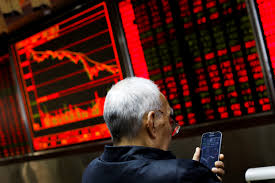 Broad stock declines in Europe and the United States dragged world equity markets lower on Monday, adding to a sell-off that has sent global stocks near 17-month lows.

“If Santa Claus doesn’t turn up very soon, U.S. stocks may end this year in negative territory”, wrote Rabobank analysts as the Nasdaq remained the only benchmark in the black for the year, with the Dow and the S&P 500 down between 2 and 3 percent.

In Europe, benchmark indexes from London and Milan to Paris and Frankfurt have lost between 10 and 17 percent year-to-date.

Some investors had hoped for a bounce back before the holidays, but any “Christmas rally” has proven elusive so far. Since 1950, Wall Street has rallied by an average of 1.3 percent during the last 5 trading days of the month, according to the Stock Trader’s Almanac.

“Some investors whom we have spoken to had positioned themselves for a December rally and the path has been painful,” broker Bernstein said in a note.

The Federal Reserve is widely expected to raise U.S. interest rates again at the end of its two-day meeting on Wednesday, but what matters more for investors will be whether it cuts its guidance on rate increases in 2019.

The Fed now projects three more increases before 2020, but recent weak data and worries over Washington’s protectionist policies have fueled expectations the central bank will cut its guidance.

“A final key rate hike for 2018 is almost a done deal, but what is more important is how the Fed’s dot plots shift in 2019 and beyond. If U.S. monetary policymakers are seeing a serious risk of economic slowdown, those dots should be pulled downward,” said FXTM strategist Hussein Sayed.

In China, where the economy has been losing momentum, investors will look to a speech by President Xi Jinping on Tuesday marking the 40th anniversary of China’s “reform and opening” policy.

China is also expected to hold its annual Central Economic Work Conference later this week, where key growth targets and policy goals for 2019 will be discussed.