World equity benchmarks hit their lowest levels in a month Wednesday as signs of a slowdown in U.S. economic growth and weak earnings in Europe fanned fears that the U.S.-China trade war could push the global economy into a recession. 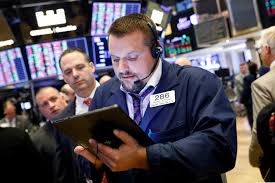 A measure of U.S. manufacturing released Tuesday fell to its lowest level in more than 10 years, removing one of few remaining bright spots in the global economy and come just as Europe is seen as close to falling into recession.

“The weakening conditions in Europe and the slowdown in China, it’s all adding up to the same thing essentially: worries that the global economy is slowing and giving investors reason to pause and take profits,” said Robert Pavlik, chief investment strategist manager at SlateStone Wealth in New York.

MSCI’s gauge of stocks across the globe  shed 1.49%, following broad declines in Europe that pushed benchmark indices to their lowest levels in a month. The FTSE 100 index slipped 2%, the largest drop across European regions.

Selling was triggered after the Institute for Supply Management’s (ISM) index of factory activity, one of the most closely watched data on U.S. manufacturing, dropped to the lowest level since June 2009.Markets had been expecting the index to rise back above the 50.0 mark denoting growth.

“Historically, equity returns are worst when the ISM manufacturing drops from levels below the 50 threshold,” said Patrik Lang, head of equity research at Julius Baer.

“Uncertainty around the U.S.-China trade war is obviously the main reason for the weakness, with companies exposed to global trade increasingly putting off investment decisions.”

Concerns about the global economic outlook pushed investors into the perceived safety of bonds. Benchmark 10-year notes US10YT=RR last rose 12/32 in price to yield 1.6026%, from 1.644% late on Tuesday.

Weak economic data weighed on oil prices, though U.S. crude was supported by industry data that showed an unexpected fall in inventories in the United States.