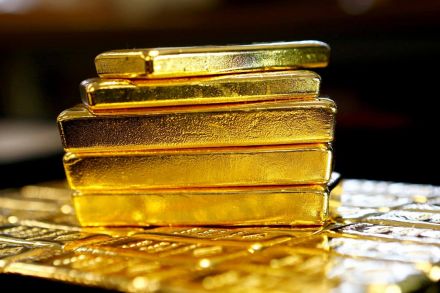 Gold fell on Wednesday as the dollar held near a 16-month high, buoyed by interest from investors seeking cover from sliding stocks and by prospects for higher US interest rates.
Spot gold was down 0.2 percent at $1,200.18 per ounce, after prices slipped to their lowest since October 11 at $1,195.90 in the previous session. U.S. gold futures fell 0.1 percent to $1,200.6 per ounce.
“The continuing dollar strength is weighing on gold. What people are doing is selling everything to buy the dollar and that includes gold,” said Alasdair Macleod, head of research at GoldMoney.com in a report monitored by business a.m.
The dollar index, a gauge of its value versus major currencies, was firm near a multi-month high, after retracing slightly earlier in the session as investors took profits, prompted by gains in the euro and sterling on the back of growing confidence about a draft Brexit deal.
Meanwhile, stocks fell on worries about a slowdown in global economic growth.
Gold, considered a safe haven asset, has fallen about 12 percent since hitting a peak in April as investors flocked to the dollar instead, with the U.S.-China trade war unfolding against a background of higher U.S. interest rates.
The dollar has benefited over the last week from expectations of further U.S. interest rate hikes.
“Gold is likely to be range bound for the reminder of the year … progress for a sustained rally doesn’t appear to be the emphasis,” said Capital Economics analyst Ross Strachan.
Spot gold may bounce to $1,211 per ounce, as it has found a support around $1,195, said Wang Tao, an analyst.
Among other precious metals, silver was down 0.2 percent to $13.95 per ounce, having matched its lowest since Jan. 21, 2016, at $13.85.
Palladium fell 0.5 percent to $1,104.65 per ounce, while platinum was down 0.3 percent at $832.10 an ounce.
Businessamlive Website Stats