By Onome Amuge
Gold prices were flung into bearish territory as a firmer dollar lowered investors’ appetite for the yellow metal on Tuesday. 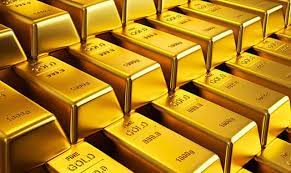 Spot gold shed 0.1 percent to $1,785.48 per ounce, while U.S gold futures plummeted 0.2 percent at $1,785.80 per ounce.
Commenting on the 0.4 percent  jump in the dollar index, Daniel Pavilonis, senior market strategist at RJO Futures in Chicago, said gold is very sensitive to any kind of move in the dollar. He added that the dollar’s recent rise is adding some pressure on the precious metal.
On the other hand, market reports noted that the U.S Treasury yields slumped to a near two-week low, cushioning gold’s fall. Dwelling on this, Pavilonis said U.S Treasury yields are giving gold a bit of cover and a higher probability of inflation is being seen without rising interest rates.

As it stands, analysts assert that the market’s focus is now centered on minutes from the Federal Reserve’s July meeting scheduled for Wednesday for cues on the central bank’s stimulus tapering. Also on investors’ radar is the rising political turbulence in Afghanistan.
According to commodity analysts at HSBC, a British multinational investment firm, events in Afghanistan do not usually affect gold prices but the swift Taliban victory could have an indirect impact on safe haven assets, including bullion.
Prices of other precious metals suffered bearish conditions as silver lost 0.6 percent at $23.69 per ounce, platinum was down 1.3 percent at $1,009.44 per ounce, while palladium plunged 2.3 percent to $2,546.53 per ounce.
Businessamlive Website Stats