Gold prices climbed on Thursday as the U.S. dollar weakened after the Federal Reserve cut interest rates for the third time this year, but signalled the monetary-easing cycle would be paused. 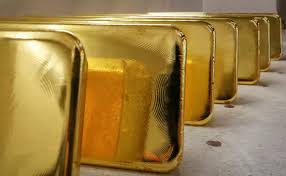 Hopes that the United States and China will sign a preliminary agreement and call a truce to their 16-month trade war was also a factor behind the Fed’s decision to signal that further rate cuts are on hold.
Spot gold was up 0.77% at $1,506.2 per ounce. Prices have risen nearly 2% this month. U.S. gold futures rose 0.82% to $1,508.9 per ounce.
“We took this step to help keep the economy strong in the face of global developments and to provide some insurance against ongoing risks,” Fed Chair Jerome Powell said.
Powell ticked off an extensive list of reasons why he feels the economy is doing well, and likely to continue to do so under the current stance of monetary policy – from robust consumer spending, strengthening home sales, and asset prices he considered healthy but not to a level of excess.
“Gold might not hold its current upside in the short run as it is likely to suffer a little as some recent economic data showed modest growth in the economy,” said Michael McCarthy, chief market strategist at CMC Markets, attributing the present rise in gold prices to a weaker dollar after Fed’s rate cut.
The dollar index against a basket of six major currencies dipped 0.3% to 97.36, making gold cheaper for holders of other currencies.
“A rise in inflation might be the next catalyst for gold buying in the short run, as the Fed is more likely to tighten with a higher inflation rate, making some investors hedge against it (inflation),” McCarthy added.
Asian shares cheered the rate cut and U.S. stock futures edged higher, with MSCI’s broadest index of Asia-Pacific shares outside Japan gaining 0.2%.
“While buoyed by a weaker dollar, if equities continue to outperform, it’s challenging to see gold move above the $1,510 critical primary resistance level,” AxiTrader market strategist Stephen Innes said in a note.
Among other metals, palladium gained slightly to $1,807.68, after jumping nearly 2% in the previous session, and was set to climb for a third consecutive month.
Silver edged up 0.8% to $18.01 an ounce, while platinum advanced 0.2% to $928.36 an ounce.