Gold prices rose on Thursday as the U.S. dollar traded close to a one-week low hit in the previous session, while investors awaited progress on the Sino-U.S. trade negotiations. 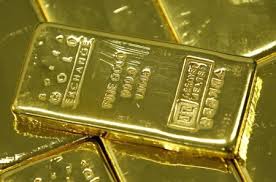 Spot gold climbed by 0.2 per cent to 1,292.16 per ounce as of 0756 GMT. U.S. gold futures firmed 0.1 per cent at 1,296.80 dollar an ounce.
“One of the key issues would be the China-U.S. trade negotiations. There is a lot of optimism around the idea that we will see a peaceful resolution and some agreement really soon,” said Michael McCarthy, chief market strategist, CMC Markets.
Any positive development around Sino-U.S. trade tends to be negative for the dollar, which has been the preferred safe-haven during the year-long tariff dispute between the world’s top two economies.
The dollar was trading near one-week low posted in the previous session after data showed U.S. services sector activity hit a more than 19-month low in March and private payrolls grew less than expected.
The U.S. non-farm payrolls data due on Friday will be the next focus for more signals about the strength of the U.S. economy.
A weak payrolls data could further weigh on the U.S. currency, making the dollar-denominated metals cheaper for investors holding other currencies.
Negotiations between the United States and China made “good headway” last week in Beijing and the two sides aim to bridge differences during talks this week, White House economic adviser Larry Kudlow said.
On Wednesday, the Financial Times reported that the two countries were closer to a final trade agreement.
“However, if the trade talks drag out we could see further support for gold because of its implications on growth,” McCarthy said.
Holdings in the world’s largest gold-backed exchange-traded fund, SPDR Gold Trust, also fell for a third consecutive session on Wednesday. Holdings were at their lowest level since Dec. 17 at 24.57 million ounces.
On the technical front, as long as prices don’t break the 1,280 dollar support, gold will be broadly range bound between 1,280 dollar and 1,320 dollar price levels, with immediate resistance around 1,302 dollar, said Ajay Kedia, director at Kedia Commodities in Mumbai.
Among other precious metals, spot platinum rose 0.7 per cent to 880.76 dollars an ounce, having earlier reached its highest since mid-June at 883.49 dollars an ounce.
The auto-catalyst metal jumped 3.4 per cent in the previous session, the most in more than two years.
Palladium gained 0.5 per cent to 1,412.30 dollar and silver was flat at 15.13 dollars per ounce.