Despite the unpredictable nature hovering the yet to be concluded trade deal between the United States and China, gold investors continue to express optimism that the outcome of the deal would bring the commodity to its normal trading figures after weeks of volatility. 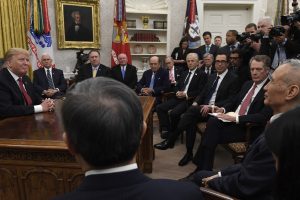 A market analyst, Peter Fertig at Quantitative Commodity Research observed that investors of the precious metal are taking further steps for more risks on gold but remained adamant despite the unforeseeable outcome that could emerge at the end of the lingering trade war between the two world’s largest economies; the U.S. and China.

However, Fertig added that investors are not only interested for both countries to sign a deal to end the trade war but they are hoping that the deal itself should bring a clear signal of an improved economic activity that will cause gold to fall and come out of its current trading figures in past weeks.

Since the beginning of the dispute, global shares surge to a record high as investors are hoping that the U.S. government would relapse some of the fines imposed on Chinese goods.

Fertig stressed that the idea of the U.S. Federal Reserve cutting the interest rates would no longer be necessary next year if the economy bounces back and that may be a major factor on the commodity.

“If the economy recovers as the US Federal Reserve expects, there might be no further rate cuts next year and that is another factor weighing currently on gold,” Fertig said.

Elsewhere, silver remained on course after trading at $18.05 per ounce while platinum fell by 0.2 percent at $934.25 per ounce.

Analyst Giovanni Staunovo noted that palladium is likely to be bullish to motivate the flow in demand to sustain the growth level as supply is expected to be on a decline next year.