The price of gold sold off over $60 on Friday, hitting a low of $1,852.50 per troy ounce and accelerating its slide below the $1,900 benchmark, falling around 3 percent as a jump in U.S treasury yields pummelled bullion’s safe-haven appeal. 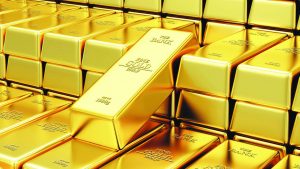 Bullion also slipped as much as two per cent in the London Metal Exchange (LME), erasing gains made at the start of the year.

Georgette Boele, analyst at Dutch based ABN Amro Bank NV said that the price crunch is technically-driven, triggered by a stronger U.S. dollar and higher treasury yields. The yellow metal, she continued, should now test support at $1,870 an ounce.

Meanwhile, bitcoin soared to new all-time highs above $41,000 on the Comex division of the New York Mercantile Exchange

Reacting to Friday’s gold plunge and the rise of the cryptocurrency, which some analysts have explained to be a key factor in the sudden disinterest of investors in the precious metal, CNBC’s Jim Cramer noted that the current price drift is a potential sign that the mainstream has flipped the script on bitcoin and digital assets.

Explaining further why gold isn’t rallying amid the political chaos on Capitol Hill last week, despite its initial surge and hopeful expectations, Cramer said the market is either not as chaotic as it seems or that all of the money is going into cryptocurrency.

“As it stands, the flagship cryptocurrency continues to outperform gold and every other major asset thanks in part to an influx of new institutional buyers,” he added.

Measured in bullion, 1 bitcoin is currently valued  at over  20 ounces of gold, an increase from its value a week earlier when it  was worth around 15 ounces.

A recent analysis from JPMorgan Chase, an American multinational financial service company, further noted that the idea that bitcoin is taking market share from gold is nothing new as the rush for cryptos and bitcoin’s digital narrative is pulling investors away from precious metals.