The president of the All Farmers Association of Nigeria, Kabir Ibrahim has disputed the claim of an outright ban on the importation of rice into the country from neighbouring countries saying that the federal government did not ban the country’s staple food but that it only placed some restrictions in order to boost local production and consumption. 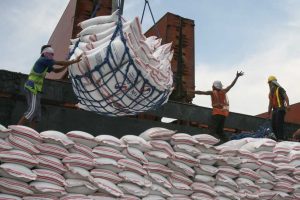 Ibrahim made this known while answering questions from journalists at the ongoing Agra Innovate West Africa in Lagos.

At the beginning of the fourth quarter of 2019, the federal government announced that it will temporarily close some of its land borders in order to reduce the influx of contraband goods and control the inflow of firearms into the country. This has to some extent on the side of the economy increased local production and consumption of some of the food items such as rice, gari, livestock among others that were hitherto smuggled into the country.

He said that countries who are smuggling these food items into the country do not have the interest of Nigeria at heart by allowing unscrupulous individuals bring in these items without paying the necessary tariffs.

He said, “There is no ban but there is some control, there’re so many hurdles that are placed for you to import it (rice), that is what I know, no country can live in isolation so it will not be good for any country to say that we have banned this if they are a member of the World Trade Organization (WTO), it is wrong to say that.”

Ibrahim stressed that the government took the step in order to improve the livelihoods of smallholder farmers who produce about 90 percent of what is consumed in the country. This drastic step, according to him, is already yielding the desired results as farmers are making more sales from the production of their products with value addition, more demand for local food items are been witnessed across the country and more people are already keying into farming to meet up with consumer demand, he said.

Also, he disputed the claim that there is food insufficiency in the country, noting that it is time for Nigerians to start learning how to produce what they eat rather than patronizing imported food products for consumption.

“I wouldn’t say there is insufficiency. You see if you learn to eat what you produce and produce what you eat you will not have that mirage you are talking about. In Nigeria, you have no business in saying that rice is your staple. Back in the olden days, we only eat rice during festivities, it’s only these days that Nigerians made rice their staple. We cannot imagine that there is insufficiency because we want a particular type of food, we should be very realistic, what is available should be what we have to eat,” Ibrahim said.