THE GOVERNOR OF NIGERIA’S Southern sub-regional Cross River State, Ben Ayade, has mapped out plans to grow the state’s economy to N9.6 trillion from its current N2.7 trillion by 2023, it emerged on Thursday. The targeted plan is contained in a 30-year growth and development strategy (GDS) roadmap for the state commissioned by the governor in Calabar. 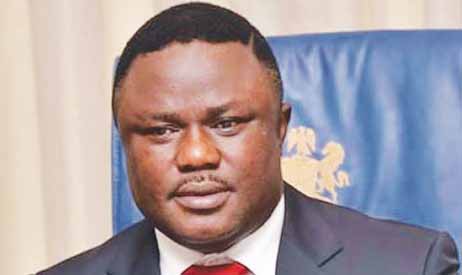 Ayade believes that using the 30-year GDS, Cross River, an oil-producing littoral state before its 76 oil wells were awarded to its neighbour, Akwa Ibom, would become “a prosperous Nigerian state with healthy and well-educated citizens, living in harmony with people and nature, pursuing inclusive and sustainable growth, moderated by good governance.”
At the official launching at the International Collaboration and Investors summit (ICIS), held at the prestigious Calabar International Convention Centre (CICC), Calabar, the governor said GDS is a fulfilment of his administration’s promise of inclusive development programmes, consistent with the ideals of the universal declaration on Sustainable Development Goals (SDGs He said that his administration’s goals and prosperity aspiration is to deepen the state economy from its current N2.7 trillion GDP level to N9.6 trillion by the close of his second term in 2023.
He noted that this would be captured in the sector-based GDS in a manner that no one is left behind. The incoming growth and development strategy roadmap were put together by the State Planning Commission (SPC), the State Economic Management Team, ministries, departments and agencies (MDAs) in the state, Civil Society Organizations, Non-Governmental Organizations, the organized private sector led by the Calabar Chamber of Commerce (CACCIMA) and professional groups.
Francis Ntamu, chief economic adviser to the governor, whose office organized the summit, said the state government deliberately articulated and implemented investor-friendly policies and measures designed to attract investors into the state.
A state-wide consultation leading up to the GDS document was sponsored by CUSO International and the Foundation for Partnership Initiatives (FPI) in the Niger Delta, and creating demonstration effects that are catalytic to achieving the vision.
Governor Ayade, who has been globetrotting since winning a second term of office in the March governorship polls in the state, was represented by the Secretary to the State Government, Tina Banku Agbor. He said the GDS plan keeps faith with a collective vision of making Cross River a prosperous Nigerian state with healthy and educated citizens, living in harmony with people and nature, and pursuing inclusive and sustainable growth via good governance.
He said his administration had made some progress in the last four years, promising to create a conducive business environment for investors by de-risking the opportunity fields for private sector investments collaboration.
He said his administration’s friendly collaboration with the Federal Government has fast-tracked the development processes for signature projects such as: the Bakassi Deep Seaport and the 275 km super highway.
However, analysts have yet to rest their case on the realizability of the socio-economic and infrastructural roadmap, given Ayade’s preposterous budgeting in the last two fiscal years that run clearly out of sync with the state’s income capacities.
Since 2018, Ayade, a professor of microbiology and former senator, has announced N1.35 trillion and N1.043 trillion budgets for 2018 and 2019. The two spending plans are 400 percent and 346 percent above the previous years.