Global: The rout across global markets continued this week, with key indices outside of China closing deep in the red. In the Asian-pacific region, the Chinese market was the lone bright spot as the Shanghai Composite rose 0.97% w/w; whereas the Japanese Nikkei-225, Hong Kong Hang Seng and the South Korean Kospi all eased 6.69%, 3.35% and 5.97% respectively. The Nikkei-225 was the worst performer across the board, as the tightening from major central bankers weighed on the yen. Moving to Europe, the rate hike decision from the Swiss National Bank and the Bank of England, weighed on sentiment in the region, as investors awaited the release of inflation data for the EU.

Additionally, concerns about higher gas prices weighed on markets following an announcement from Russian state energy company Gazprom that the gas transfer to Italian energy company Eni S.p.A. will be reduced to 65% of its initially requested volume. As a result, natural gas price futures surged 23% amid the increasing concerns about gas supply and updates on Gazprom deliveries; Germany, Italy and France are expected to see a reduction in gas deliveries from Russia. For the week, the German Dax, French CAC and London FTSE-100 sank 4.73%, 4.37% and 3.53% respectively. Finally, moving to the United States, the decision by the Federal Reserve to raise interest rates by 75bps, came as no surprise to the market as the bank seeks to combat inflation. Growth stocks fell sharply this week, with the NASDAQ being the worst performer w/w, sinking 5.96%; the S&P500 and Dow Jones Industrial Average posted significant losses as well shedding 5.62% and 4.53% respectively. 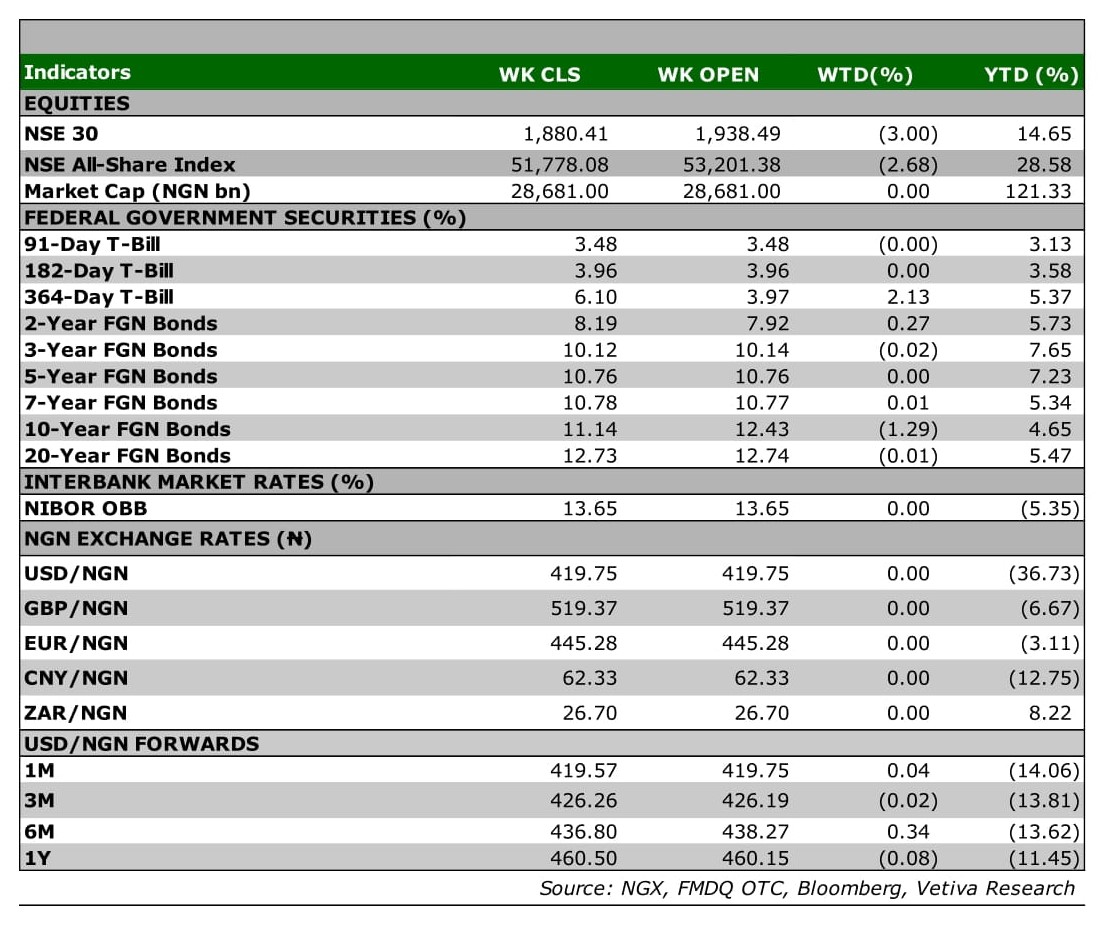 Domestic Economy: According to the National Bureau of Statistics, headline inflation rose to a 10-month high of 17.71% y/y. This uptick was driven by low load dropouts during the long holiday season amid high distribution costs, which cascaded into fuel scarcity in some Northern states. Food inflation rose to 19.50%, as high freight charges stoked food prices. Going forward, inflation could remain elevated, as incidences of fuel scarcity re-occur.

Equities: Local equities fell sharply this week, as the overall bearish sentiment across the global space filtered into the domestic market. Losses across the index were broad based, with the Banking sector falling sharply, down 5.20% w/w ending the week as the worst performer. Investors largely sold off counters across the space, with ZENITHBANK, ACCESSCORP and FBNH sinking 6.35%, 5.10% and 8.06% respectively. Moving to the Consumer Goods space, the positive sentiment in the space witnessed over the past several weeks, gave way to moderate sell-side activity this week. The sector lost 1.16%, driven by losses in INTBREW amongst others. The brewer saw its share price fall a whopping 14.97% w/w to settle at ₦6.25/share. Likewise in the Oil and Gas space, losses across the oil marketing space saw the sector ease 1.80% w/w of note OANDO and ARDOVA dipped 6.67% and 9.97% respectively w/w. Finally, the Industrial Goods space was not spared from the bearish sentiment as well, evidenced by the 0.08% loss observed in the sector for the week.

Fixed Income: Trading activity in the fixed income market was light this week, with yields trending upwards in the NTB and OMO spaces, while the bonds segment traded quietly. Minimal activity in the bonds space resulted in average yields closing flat for the week. On the other hand, bearish sentiments persisted in the OMO and NTB segments, as market selloffs resulted in average yields rising by 27bps w/w and 29bps w/w, respectively.

Equity market: With continued selloffs amid bearish sentiment in the market, we expect to see mixed trading sessions next week as investors continue to trade cautiously.

Fixed Income: In the coming week, we expect the bond market to trade on a tepid note ahead of the bond auction on Monday. Meanwhile the T-bills market should trade in line with the level of system liquidity.
Currency: We expect the naira to remain largely stable across the various windows of the currency space as the CBN maintains interventions in the FX market.

The build-up of Russian aggression, which culminated in its invasion of Ukraine, sent both the warring states and the rest of the world into a frenzy of unpleasant events. The attacked, Ukraine, severed by a humanitarian and economic crisis, suffered the tragic loss of civilian lives, destruction of key infrastructure, and the overnight transformation of its peaceful streets into a war zone. After months of denying any intention of an invasion, Russia launched a full-fledged attack, deploying foot soldiers and sophisticated arsenals to destroy its brother state. While the West applied weighty economic sanctions to bring Russia to its knees, the backlash from these sanctions has been seen and felt worldwide.

The impact of the war on several economies – Africa inclusive – is far-reaching: from high energy prices to expensive food imports, weaker currencies, tight financing conditions, and slowing economic growth. From Q2’22, base effects from the pandemic-induced recovery could fade, as central banks turn on the hawkish taps to rein in inflation. With elections on the horizon, the fiscal authorities in Kenya, Nigeria, and Angola, could stall reforms.

In Nigeria, the countdown to the 2023 general elections has begun, keeping fiscal authorities in a welfarist mode. From the postponement of subsidy removal to the reopening of the borders, we see increased commitments to tame inflation from the fiscal angle. The monetary authority has finally picked up its inflation-fighting tools, preparing for the demand-pull inflationary threats from Nigeria’s longest campaign cycle. The Naira could remain under the weather as volatile oil production, postponement of key reforms, and risk-off sentiments stall external flows.

History provides us with evidence that inflation slows in every pre-election year since 1999 (excluding 2010). There are a couple of factors that could alter that trend in 2022, including the sustained rise in energy prices, resurging incidences of fuel scarcity, and elevated demand for FX (as a result of Nigeria’s long election campaign cycle). In addition, incidents of crude theft could degenerate into further oil revenue losses and weaker exchange rates. These combined risks create a lot of uncertainty in H2’22.

In H1’22, we observed several policy choices geared at taming inflation, including the postponement of subsidy removal. However, the importation of off-spec Premium Motor Spirit (PMS) upset consumer prices, as the ensuing fuel scarcity drove the price of PMS to a 50-month peak of ₦185/litre in March 2022. While the price of PMS has moderated subsequently, the price of deregulated energy products as diesel have since gone up. We understand that the recent incidences of fuel scarcity some northern states are caused by high cost of fuelling petrol tankers (which run on diesel). High operational costs led to the deployment of fewer tankers. Media reports suggest that the President has approved higher freight rates for transporters, while keeping the pump price of PMS constant.