Global: Following the recent sessions of declining stock prices, global markets rallied this week, as broad-based bargain hunting supported gains. The reaction to the FED Chairman’s statement that it would be appropriate to see further rate hikes to bring down inflation as well as the call for a federal suspension on gas tax for the next 90 days boosted investor sentiment in U.S. markets which were the top performers this week. Meanwhile, energy prices rallied on Friday, as concerns over supply constraints weighed on futures prices. In Germany, the nation considering plans to nationalize sections of the Nord Stream 2 gas pipeline; according to a report from Der Speigel the Ministry of Economy is studying the possibility of transforming parts of the pipeline into a liquefied natural gas terminal connection on the Baltic Sea coast. German Economy Minister Robert Habeck stated that some companies would have to close if there is not enough gas due to the critical situation with the supply from Russia; WTI and Brent for settlements in August surged 2.23% and 2.12% to $106.8/bbl. and $112.42/bbl. respectively. Finally, global yields declined fell this week, boosted by investors anticipation of an aggressive fight against inflation from key central bankers. The yield on the U.S., Germany, and Australia 10-Year bonds dipped, 10bps, 14bps and 13bps to settle at 3.18%, 1.47% and 3.86% respectively. 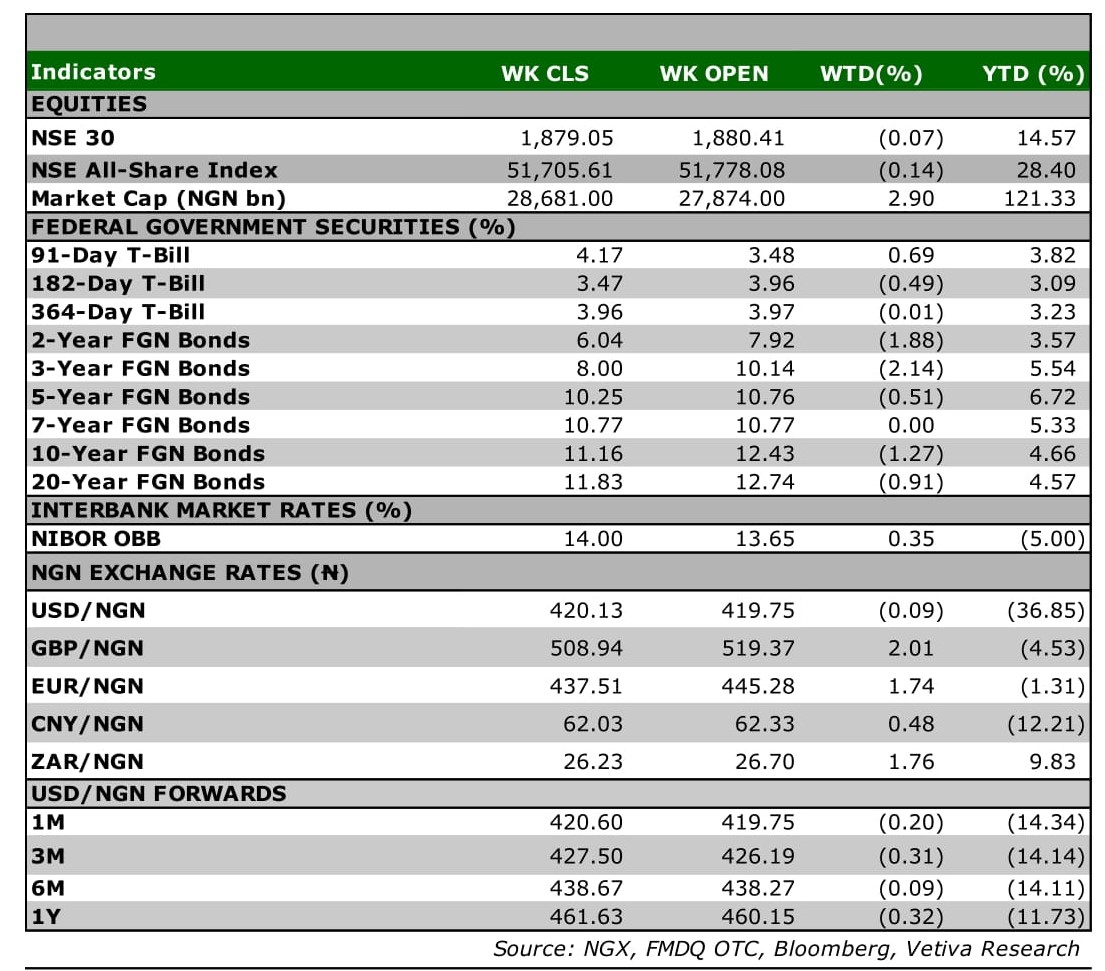 Domestic Economy: Supply disruptions from the vandalism of pipelines (a cheaper mode of transporting fuel) have now made road transport of PMS the alternative means of fuel distribution within the country. As a result, petrol queues have resurfaced due to the elevated costs of fuelling petrol tankers (seeing they run on unsubsidized diesel). While the President had earlier approved a higher freight charge to cushion the impact of high distribution costs, the NNPC released petroleum products from its tank farms at margin-friendly prices, assuring adequate supply. Consequently, the earlier decision by marketers to sell above the approved price was retracted, dousing tensions. While we expect the scarcity to upset consumer prices in the ongoing month, we see room for a medium-term reprieve.

Equities: Nigerian equities closed lower this week, as higher rates in the fixed income market have seen some fund managers sell-off growth assets, in the pursuit of higher yields in the FI space. The market sank 0.14% w/w to settle at 51,091.75pts, as losses in the Consumer and Industrial Goods sectors weighed on its performance. The Consumer Goods space was the worst w/w performance, falling 2.02% as losses in key names, FLOURMILL, NB, and PZ dragged its performance. Meanwhile, in the Industrial Goods space losses in WAPCO amongst other players in the sector, saw the space sink 1.89% w/w. On the other hand, the Oil and Gas space as well as the Banking sector posted modest gains this week, rising 0.32% and 0.33% w/w.

Fixed Income: Trading activity in the fixed income market was mixed, with yields trending upwards in OMO space, while easing in the bonds and NTB segments of the market. Investors reacted positive to the bond auction held on Monday, as yields across benchmark bonds eased 5bps on average. Likewise, in the NTB space yields eased 4bps on average, driven by buy-side activity at the short-end of the NTB curve. On the other hand, sell-offs across the OMO space were aggressive this week, evidenced by the 66bps rise in yields across the space; in large party driven by sell-offs at the short-end of the market.

What will shape markets in the coming week?
Equity market: This week’s trading pattern was mixed as we saw days of declines followed by positive activity. We anticipate similar trade pattern next week with minimal activity as investors continue to cherry pick attractive counters across board.

Fixed Income: We expect to see a mixed week of activity across the market as investors continue to cherry pick attractive offers across the fixed income space, as we enter the last trading week for Q2’22.
Currency: We expect the naira to remain largely stable across the various windows of the currency space as the CBN maintains interventions in the FX market.

What will shape markets in the coming week?
Equity market: This week’s trading pattern was mixed as we saw days of declines followed by positive activity. We anticipate similar trade pattern next week with minimal activity as investors continue to cherry pick attractive counters across board.

Fixed Income: We expect to see a mixed week of activity across the market as investors continue to cherry pick attractive offers across the fixed income space, as we enter the last trading week for Q2’22.
Currency: We expect the naira to remain largely stable across the various windows of the currency space as the CBN maintains interventions in the FX market.

H2’22 Nigeria Outlook – A strange labyrinth
2022 started off with hopes of further economic recoveries from the ravages of the coronavirus pandemic. However, barely two months into the year, the global economy took an unexpected turn after Russia invaded Ukraine, fuelling a surge in general price levels, as global food and fuel supplies were dealt a severe blow. As tensions continue to brew in Eastern Europe, it remains unclear the amount and the severity of fresh sanctions that would be imposed on Russia in the coming months, leaving global economic outlook somewhat hazy. .

Although Russia and Ukraine only account for 2.5% of Nigeria’s imports, the implications of the war in the oil market have culminated in harsh cost pressures across the country, with headline inflation racing to a 10-month high in May. While we hold the expectation that inflationary pressures would persist in the second half, we see the possibility of margins remaining stable across the FMCG space, as food manufacturers may continue to pass on rising costs to consumers.

As supply disruptions are expected to keep oil prices elevated through the year, we see upstream players well positioned for sharp revenue growth, although frequent production downtime and incessant crude theft may limit the gains from high oil prices. On the flipside, higher landing costs of fuel commodities may drag margins for downstream players. As per industrials, increased construction activities by the government, as well as rising cement consumption in the real estate sector, will continue to drive topline growth, while cost pressures are a major downside risk to profitability margins.

In addition, continual interventions from the CBN should drive output growth across the agriculture sector, while geopolitics-induced price rally in agro-commodities could leave margins in a healthy position through the second half. Similarly, we see further expansion in telecommunications, as increasing internet needs and rising smartphone penetration propel data income. We also see the launch of payment service banks (PSBs) as a significant boost to revenue in the coming years. Lastly, the recent rate hike by the CBN, alongside loan book expansion, should deliver a positive outcome for interest income among Nigerian banks through the H2 period.

Regional Markets: Global tightening, inflation to drive SSA economies to raise benchmark rates
Yields across Sub Saharan African (SSA) markets have risen across board as secondary market participants have reacted to the latest guidance from their respective central banks. With expectations of further rate hikes in advanced markets, monetary officials in the Sub-Saharan region will come under pressure to raise rates as well, as they try to attract and keep flows from the foreign market.

However, risks for investors are uneven across board with select countries in the region facing mounting fiscal risks such as Ghana, while a rebound in the tourism sector has boosted investor confidence in other countries in the region, namely Kenya. One of region’s two largest economies, Nigeria, is not expected to see significant pressure on the currency from capital outflows, given the limited inflows into the country during an easing of monetary conditions in 2020; however, FX supply constrains persist. While for South Africa, a low inflation rate, coupled with higher yields in the fixed income market, has made South African bonds attractive to investors, due to the positive real rate of return.