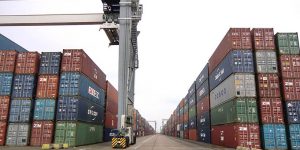 Scores of clearing agents, protested at the terminal on Thursday over alleged inefficiency and constant breakdown of its container handling machines.

Leader of the protesting agents, Emmanuel Onyeme, a member of the Association of Nigerian Licensed Customs Agents (ANLCA) said the floors within the Hanover were not paved, a situation that makes it waterlogged and inaccessible after a downpour.

Addressing the agents, CarjetanAgu, director of Consumer Services at the Nigerian Shippers Council, said that the council would stop further stemming of containers to Hanover until the floors of the terminal are properly paved

He warned that if the terminal fails to pave the floors of the facility the council would shut it down. Agu noted it would be difficult to offload containers inside the terminal whenever it rains.

“We are aware of the problems they have here at this terminal, so we have taken a decision that they are going to waive the demurrage because the delay is on their own part. My plea is that you should be patient and submit your documents for update in order to enable you pay the right charges,” he said.

Addressing journalists earlier, the former Tin Can Chapter spokesman of ANLCA, Emmanuel Onyeme lamented that the container handling has stopped working since last Friday. He said that apart from the N5,000 Hanover Terminal is demanding as demurrage per day, clearing agents are also being charged N12,000 per day, due to the inefficiency of Hanover Terminal that is clearly not the fault of the agents.

He said, “By Monday, most of the agents that have collected their terminal delivery order could not go out of the terminal. We thought that the management would use Saturday and Sunday to fix the faulty machine, but we discovered that nothing was done on it. As at Wednesday, the machine worked, picked some few containers and started overheating, we told them we cannot accept this. We expected the terminal to go to neighbouring terminal and hire another kama, but the MD of Hanover, Mr Steve, he doesn’t care, all his concerns is to collect his tranzire money and go”

“Under normal bonded terminal management, they are supposed to have good handling machines, also looking at the terminal, it doesn’t meet up the requirements of a bonded terminal, it doesn’t also meet up with ISPS Code, the terminal is very rough, containers are not well stacked, this also leaves room for wharf rats to come into the terminal and vandalise peoples containers. We pay N5,000 per day as demurrage, also at the shipping companies, demurrage is accumulating, even if at the end of the day, Hanover decided to waive their own demurrage, they have accumulated demurrage for us at the shipping companies, our concern is that they don’t have equipment”

“The shipping company charges vary from first to third period, we pay N9,500 to TICT per day for the second period, third period is N12,000 per day, this is the amount that we are paying. This terminal does not meet up with the ISPS Code and NIMASA is here sharing the same building with them, they are seeing what people are going through here, I expected them to pass information to the necessary department, especially the enforcement department”