Most executives care about creating long-term shareholder value but haven’t had the right tool to track it. In a recent paper published in Strategic Management Journal, Wharton management professor Nicolaj Siggelkow and Phebo Wibbens, assistant professor of strategy at INSEAD, introduce a new performance measure called LIVA – Long-term Investor Value Appropriation. In the following opinion piece, Siggelkow and Wibbens explain why they developed LIVA and how it differs from other measures of success. (This article was originally published in INSEAD Knowledge.)

Imagine you were fortunate enough to have bought 100 shares of Apple stock in 1999. If you had then reinvested any dividends and sold your shares 20 years later, you would have made an annualized return of 27%, well above the market average of 6%. This is surely a healthy return, but hardly as spectacular as one would expect. In fact, in terms of total shareholder returns (TSR), Apple’s performance ranks 3,175th among companies worldwide. Does this mean that Apple’s success hasn’t been as exceptional as is often claimed?

No, the problem isn’t the performance, it’s the tool used to measure information. What the TSR ranking example shows is that current measures of corporate performance do not capture long-term value accurately. Even though the list of performance measures seems almost endless – ROA, ROC, EBIT, EBITDA, CAR, EPS, quarterly earnings growth and so on – none of them precisely captures what is most important to many executives and investors: creating long-term shareholder value. Therefore, in a recently published paper in the Strategic Management Journal, we introduce a new performance measure that does exactly that, Long-term Investor Value Appropriation (LIVA). 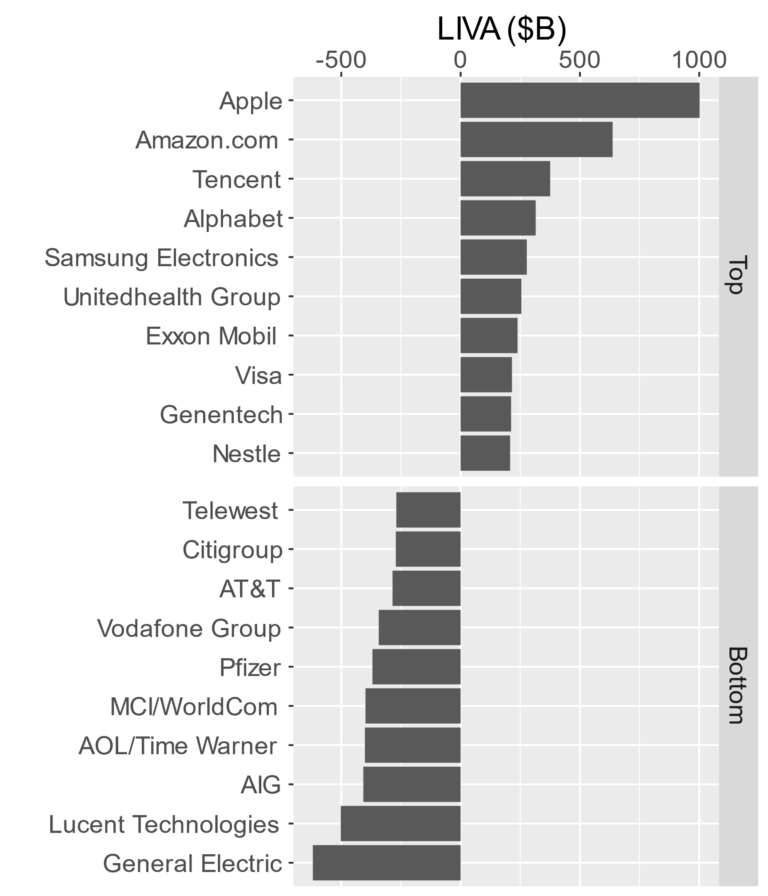 The idea behind LIVA is simple: Use share price data to calculate the value a company has either created or destroyed for its entire investor base. Our measure is closely related to net present value (NPV), which estimates the value of a project based on expected future cash flow. NPV has been the gold standard for CFOs to decide in which projects to invest. LIVA, on the other hand, uses historical data to estimate how much value a company actually created for its investors.

Expanding on the Apple example: If in 1999 you had bought the entire company at its then-market price, accounted for any cash received through dividends or share buybacks, and went on to sell the company 20 years later at its (much improved) market price, you would have been over a trillion dollars richer than if you had invested the same amount of money in an index fund. In other words, Apple’s LIVA over this period was more than $1,000,000,000,000. This number shows the truly exceptional performance of Apple. It is the number one company in our global database, with a LIVA 57% higher than number two (Amazon) in our rankings.

This example shows the power of LIVA: Unlike other metrics, it measures long-term value creation for the entire shareholder base.

To help managers and researchers identify the best and worst performing companies in the world, or a region, or an industry, we have created a database of more than 45,000 companies with LIVA data over the past 20 years. The figure below shows the global top 10 and bottom 10 over the period 1999 to 2018:

The top five consists of tech companies which have created more than $2.6 trillion in shareholder value. Interestingly, the bottom list includes several tech companies as well: Lucent, MCI/WorldCom and AOL/Time Warner (which over this period destroyed a remarkable amount of value). In fact, the Technology Hardware & Equipment companies in our database had a LIVA of negative $2.2 trillion in aggregate – the second-most value destroying industry (after Telecommunication Services). The extreme distribution of long-term performance in tech is a consequence of network effects. Only those companies that dominate their respective sectors are able to create enormous shareholder value, while the majority of tech companies actually destroy investor value.

Limiting one’s view to the top-performing companies is dangerous. A look at the top 10 might lead to the conclusion that tech is the place to be to create value. However, the overall picture leads to a very different conclusion: Only companies that were able to exploit a unique competitive advantage have been successful.

Of course, creating shareholder value should not be executives’ sole focus. Recently many American CEOs redrafted their vision of the corporation to encompass the importance of all stakeholders. We believe that using LIVA can be a step towards a focus on broader society. Companies that prioritise their long-term performance cannot ignore their stakeholders. Managers concerned mainly with short-term metrics such as quarterly earnings growth will be tempted to make quick cash at the expense of suppliers, customers and broader society. However, in the long run these actions will likely backfire due to customer protests or stricter regulations, ultimately destroying value as measured by LIVA.

Moreover, to meet rising pension demands in an ageing society, the world badly needs more companies that create long-term returns. Such firms can play an instrumental role in energy transition and feeding the world more sustainably. LIVA provides managers with a metric that can help them gauge long-term value creation and consider which strategic decisions can allow their firms to flourish in society.

Get started using LIVA with the tools on www.liva-measure.com, including interactive access to the full global LIVA database of more than 45,000 companies.