The third quarter of every year is usually a period when Nigerian farmers begin to experience what is termed “harvest season”. The harvest season marks a significant availability and high production of the major constituents of the country’s food basket and most often, a period when agricultural products command low prices in the market. 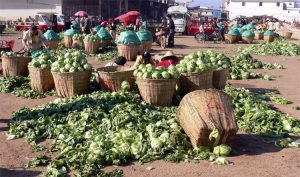 Despite the positive impact of the season on producers and consumers alike, food security has continued to be a major challenge bedevilling food production, with many farmers losing a lot in terms of monetary value occasioned by post-harvest losses.

According to a report by ActionAid, an international non-governmental organisation, Nigeria contributes about 51 percent of the total food supply in West Africa but the country loses an estimated N3.5 trillion to post-harvest losses.

Ene Obi, ActionAid’s country director, noted that this challenge has put tremendous pressure on the supply chain and prices of food commodities. She added that the effect of the annual post-harvest losses has not only affected Nigeria, but also negatively impacted other countries in the West African region.

Dwelling on the report, Mustapha Shehuri, minister of state for agriculture and rural development, observed that post-harvest losses have a negative effect on the agriculture sector’s contribution to the Gross Domestic Product (GDP). He added that the losses incurred for fruits and vegetables could be as high as 50-60 percent if poorly managed.

Shehuri, who was represented at the event by  Shehu Bello, director, lands and climate change management services in the Ministry of Agriculture, pointed out that not much attention is paid to addressing the post-harvest challenge as much as it is done for production. This, he said, has resulted in the annual recurrence of losses to not just the food producers, but also the economy at large.

Causes of post-harvest losses in Nigeria

Many Nigerian farmers, particularly those in the rural regions where most of the country’s basic crops are grown, lack adequate storage facilities as most of them depend largely on the use of natural resources such as sunlight and air to dry their crops most especially cereals and legumes. This adversely affects crops as in several cases, grains spread in the open for sun drying are consumed by birds and insects. Moreso, the probability of contamination is high as crops get mixed with stones, sand and other non-consumable particles, instigating post-harvest losses.

A survey by Irucin Foundation, a non-governmental organisation, disclosed that small-scale farmers in farming communities of Sanga local government in Kaduna State and Ushaffa in the Federal Capital Territory (FCT) recorded high post-harvest losses as the variety of crops harvested including okra, melon and grains usually dried on the roadsides and other exposed places.

“The intrusion of external factors such as pests and rodents resulted in labour waste and income reduction for the farmers,” the survey noted.

Transportation of crops from production points or farmlands to market is another notable challenge  as many of the roads are barely accessible, making it difficult for food marketers and middlemen to transport their products, especially perishables like tomatoes, carrots, cucumber, watermelon, etc.  to commercial centres.

Reports have shown that many of the vehicles used in transporting the commodities take several days to get to their final destinations and some of the produce deteriorate on transit before reaching their final destinations. As a result, their market value reduces drastically, leading to consumers pricing them far below their production costs. In several cases, the produce are discarded, leading to financial losses for the producers and investors in the agricultural sector.

A report by the Global Alliance for Improved Nutrition (GAIN) showed that out of about 1.5 million tonnes of tomatoes harvested per season in Nigeria, 700,000 tonnes are lost to post-harvest obstacles.

Funmi Bolarin, a food scientist in the processing and storage engineering department, National Centre for Agricultural Mechanization (NCAM), noted that a large number of Nigerian farmers still make use of raffia baskets and jute bags to package perishable products such as tomatoes, mangoes, bananas, onions, etc.

According to Bolarin, these baskets/bags do not give room for adequate or proper ventilation and their interiors are also rough and create bruises on crops, leading to spoilage and waste. She added that the majority of agriculture producers in Nigeria are smallholders who do not have access to the appropriate technology needed to protect agricultural produce from post-harvest losses. This, she explained, is in contrast to the situation in developed countries such as the US, China, Australia, New Zealand and the likes, where technology-based innovations are employed to curb post-harvest losses.

Michael Omodara, principal research officer, Nigerian Stored Products Research Institute (NSPRI), Ilorin, said challenges such as poor packaging and insufficient information on market requirements have exacerbated post-harvest losses. He further noted that post-harvest loss has a significant impact on the fresh fruits and vegetables value chain as it affects access to quality, nutritious foods for consumers as well as the economic power of farmers.

Since its inception, the President Muhammadu Buhari administration has implemented some strategic plans towards improving agricultural production, of which the Anchor Borrowers Programme (ABP) is a notable mention. Industry analysts have, however, noted that post-harvest losses remain a critical issue incapacitating the government’s goal of actualising self-sustenance and boosting revenue generation. They contend that this challenge can be addressed if the right measures are taken by all sectors involved in the food value chain.

The Food Health Systems Advisory, an agriculture consulting firm, suggested that farmers can combat post-harvest losses by forming marketing cooperatives which will enable them to have a central location where they can market their produce at reasonable prices.

According to the consulting firm, linking farmers, especially those in the villages, to buyers is one of the means through which post-harvest losses can be reduced.

It further suggested linking farmers to domestic processors, mini-markets, supermarkets, hotels, restaurants which will help farmers to market their produce at reasonable prices. It also suggested sensitisation and advocacy on the selection of technologies that are appropriate for each post-harvest handling of the agricultural products.

The Nigerian Stored Products Research Institute enjoined farmers and stakeholders in the agriculture sector to facilitate the adoption of technology towards scaling post-harvest losses affecting the agricultural sector.

Patricia Pessu, the institute’s executive director, said the application of technology is expedient in sustaining not only crops and vegetables but every aspect of the post-harvest agriculture sector including livestock, poultry and fish storage.

She disclosed that the NSPRI, a major research institute under the auspices of the Agricultural Research Council of Nigeria (ARCN), has employed technology-based devices towards tackling post-harvest losses through the construction of Evaporative Coolant System (ECS) for storage of fresh fruits and vegetables, provision of ventilated reusable plastic crates for packaging and transportation of vegetables, ice fish boxes for storage and handling of fresh fish,  hermetic anti-rust steel drums with the capacity to store multiple dried durable products and, also, conversion of crops into flour (wheat flour, poundo yam, ground rice and beans flour) to prolong their elasticity and prevent spoilage.

Pessu called for increased popularisation of NSPRI technologies and their availability to all stakeholders at affordable rates to ensure food sustainability and maintain value of agriculture products. She also encouraged an attitudinal change in storage, transportation, processing and marketing practices by all relevant actors in the food storage value chain.

He encouraged Small and Medium Enterprises (SMEs) to venture  into the processing of fresh fruits and vegetables into salads, sauces and other secondary products for direct consumption. He also urged development of third-party logistics and cold-chain transportation in response to consumer needs.