Several hundreds of youths from the Ogoni Youth Federation (OYF) recently blocked the Eleme-Onne axis of the 675 km East-West Road (EWR) in a peaceful protest against what they termed the federal government’s neglect of that axis of the road. 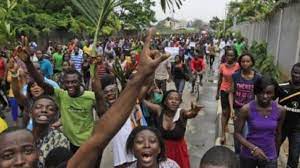 The protesting youths said their angst stemmed from indifference of the federal government to years of demands for reconstruction of that axis of the 675 km highway that connects the South-South to the South West, hence the name East-West Road.
The youths mobilised trucks which they used to block the Akpajo and Refinery junction axis of the highway, making it extremely impossible for thousands of workers and tens of thousands of articulated vehicles who use the route to their offices and factories, to move on both ends of the road.
Legborsi Yamaabana, president of the OYF told Business A.M. that they initially planned the protest tagged “Mother of all Protests” on July 27, but had to do a decoy following intelligence report they received about plans by the Muhammadu Buhari administration to unleash soldiers against them, in the characteristic, the language they understand.
“In order to avoid collateral casualties, because credible reports from our intelligence unit revealed plots to infiltrate the protesters with armed miscreants,” the group said.
Upon the expiration of the 14-days ultimatum to the federal government during Ogoni Youths’ warning protest at Aleto Bridge by the Ogoni Youth Federation to inter alia commence the reconstruction of the deplorable Ogoni section of the East West road, together with four  flyovers at: Akpajo, Aleto, Alesa and Onne junctions, respectively, and after due consultation with various groups and critical stakeholders, the Ogoni Youth Federation (OYF) in conjunction with other pan-Ogoni groups invited the media, friends of Ogoni and Ogoni people from all kingdoms, towns and local government areas to a ‘MOTHER OF ALL PROTESTS’ over the dilapidated state of the East West road, Yamaabana’s OYF had said in a statement.
The group said the Ogoni axis of the East West road is the only link to the Port Harcourt Refining Company, Indorama Petrochemicals, Nigerian Ports Authority Onne, Oil and Gas Free Zone Onne and about 300 multinational companies.
“Despite the aforesaid, and the huge economic value of the road, the Federal Government has refused to fix it, thereby infusing hardship on our people and commuters. We have suffered for too long. Enough is enough! History is on our side; God is on our side,” the group said.
Contract to build the EWR was awarded nearly 20 years ago by the Olusegun Obasanjo administration at the cost of N720 billion. All along till date, the central government has never managed to exert enough will to fund the project.
The current administration of Muhammadu Buhari had only recently begun minor works at the Akwa Ibom end, leaving large portions in Delta State through Bayelsa and Rivers unattended to.
Businessamlive Website Stats