Ecobank Nigeria Plc, one of the leading banks in the treasury business in Nigeria and ranked amongst the top 10 banks in providing access to government securities, on Wednesday successfully tapped into international debt capital markets with a new $300 million Eurobond issuance on the London Stock Exchange (LSE) for a 5-year tenor at 7.125 per cent in a 144A senior unsecured bond offering. 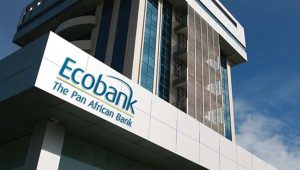 The issue signifies a robust achievement for the bank and also for the Nigerian Eurobond space as it marks the first senior Eurobond for Ecobank Nigeria and its sophomore international capital markets issue, as well as the first African bank Eurobond issue in 2021.

In addition, the issue represents the lowest (outstanding) Nigerian bank Eurobond coupon supported by an over 3 times oversubscribed order book.

While the transaction saw significant demand from asset managers from Europe, with the UK inclusive, demonstrated by a number of large tickets representing over $20-30 million, the African account also recorded high interest, including solid anchor orders from development financial institutions (DFIs) and asset managers, which overall brought $300 million in orders.

However, Rennaissance Capital placed orders worth over $700 million as well as 30 other sole orders worth $240 million.

The new Eurobond offering had been preceded by a broad marketing campaign accompanied by a non-deal and deal roadshows, which covered over 90 institutional investors, with the senior management team chairing investor calls and one to one meetings.

Similarly, investor engagement exercise generated over $400 million in the indication of interests (IoIs) prior to the books opening and allowing for a formal announcement of the bookbuild to be opened subsequently.

The order book which was opened in the early hours of February 10 with its initial price thoughts (IPTs) released at 7.75 per cent area, saw a strong momentum as it became fully covered shortly after opening and allowing for the issuer to revise the guidance to 7.500 to 7.625 per cent. The book still continued witnessing strong demand, reaching 3.7x oversubscription at peak and so another revision to “7.125-7.250 per cent of the will price within range (WPIR)” followed. The issue was finally launched at 7.125 per cent; which is 62.5 basis points below the initial price thoughts (IPTs).

Meanwhile, the transaction was followed with a number of blue chip local, regional and international financial institutions, led by Citi, Mashreq, Renaissance Capital and Standard Chartered as joint lead managers and bookrunners.